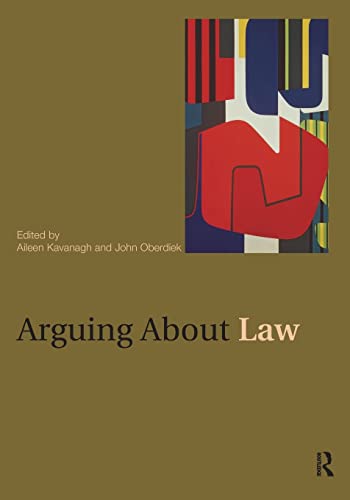 Arguing About Law
by Edited by Aileen Kavanagh (University of Oxford, UK)

In Stock
£25.99
A reader for students new to philosophy of law, legal theory and jurisprudence. It covers a wide range of topics, helping the student get to grips with the classic and core arguments and the debates in philosophy of law.
Good
Only 1 left

Arguing About Law by Edited by Aileen Kavanagh (University of Oxford, UK)

Arguing about Law introduces philosophy of law in an accessible and engaging way. The reader covers a wide range of topics, from general jurisprudence, law, the state and the individual, to topics in normative legal theory, as well as the theoretical foundations of public and private law. In addition to including many classics, Arguing About Law also includes both non-traditional selections and discussion of timely topical issues like the legal dimension of the war on terror.

The editors provide lucid introductions to each section in which they give an overview of the debate and outline the arguments of the papers, helping the student get to grips with both the classic and core arguments and emerging debates in:

Arguing About Law is an inventive and stimulating reader for students new to philosophy of law, legal theory and jurisprudence.

About Edited by Aileen Kavanagh (University of Oxford, UK)

Aileen Kavanagh is Reader in Law and Fellow of St. Edmund Hall, Oxford, UK. John Oberdiek is Professor of Law at the Rutgers University School of Law, Camden, USA, and Co-Director of the Rutgers Institute for Law and Philosophy.

General Jurisprudence 1. The Nature of Law: Framing the Debate 1. Oliver Wendell Holmes, The Path of the Law 2. H. L. A. Hart, Positivism and the Separation of Law and Morals 3. Lon L. Fuller, Positivism and Fidelity to Law: A Reply to Professor Hart 4. Ronald Dworkin, The Model of Rules 2. Legality and Morality 5. Joseph Raz, Legal Positivism and the Sources of Law 6. Jules Coleman, Negative and Positive Positivism 7. Robert George, Natural Law and Positive Law 8. Ronald Dworkin, Law as Interpretation 9. John Gardner, Legal Positivism: 51/2 Myths Law, the State and the Individual 3. The Rule of Law 10. Joseph Raz, The Rule of Law and its Virtue 11. Ronald Dworkin, Political Judges and the Rule of Law 12. Jeremy Waldron, The Rule of Law as a Theater of Debate 4. The Duty to Obey the Law 13. Joseph Raz, The Obligation to Obey: Revision and Tradition 14. John Rawls, The Justification of Civil Disobedience 15. Martin Luther King, Jr., Letter from a Birmingham Jail 5. The Legal Enforcement of Sexual Morality 16. John Finnis, Law, Morality, and `Sexual Orientation' 17. Stephen Macedo, Against the Old Sexual Morality of the New Natural Law Rights 6. The Nature of Rights 18. H. L. A. Hart, Are There Any Natural Rights? 19. Neil MacCormick, Rights in Legislation 20. Ronald Dworkin, Rights as Trumps 21. Joseph Raz, Rights and Individual Well-Being 7. Rights, Terrorism, and Torture 22. Jeremy Waldron, Security and Liberty: The Image of Balance 23. Henry Shue, Torture in Dreamland: Disposing of the Ticking Bomb 24. Jeff McMahan, Torture, Morality, and the Law Theorizing Areas of Law 8. Constitutional Theory: Interpretation and Authority 25. Jeremy Waldron, A Rights-Based Critique of Constitutional Rights 26. Cecile Fabre, The Dignity of Rights, 27. Andrei Marmor, excerpt on constitutional interpretation from Interpretation and Legal Theory 28. Antonin Scalia, excerpt on constitutional interpretation from A Matter of Interpretation: Federal Courts and the Law 9. Criminal Law Theory Punishment 29. Daniel Farrell, The Justification of General Deterrence 30. Antony Duff, Penal Communities 31. John Gardner, Crime: In Proportion and in Perspective 10 Tort Theory: Corrective Justice 32. A. M. Honore, The Morality of Tort Law - Questions and Answers 33. Stephen R. Perry, On the Relationship Between Corrective and Distributive Justice, 34. Jeremy Waldron, Moments of Carelessness and Massive Loss Critical Approaches to Law 11. Critical Legal Studies, Critical Race Theory and Feminist Theory 35. Roberto Unger, The Critical Legal Studies Movement 36. Richard Delgado, The Ethereal Scholar: Does Critical Legal Studies Have What Minorities Want? 37. Anne Phillips, Feminism and the Politics of Difference

GOR004731736
Arguing About Law by Edited by Aileen Kavanagh (University of Oxford, UK)
Edited by Aileen Kavanagh (University of Oxford, UK)
Arguing About Philosophy
Used - Good
Paperback
Taylor & Francis Ltd
2008-12-18
622
0415462428
9780415462426
N/A
Book picture is for illustrative purposes only, actual binding, cover or edition may vary.
This is a used book - there is no escaping the fact it has been read by someone else and it will show signs of wear and previous use. Overall we expect it to be in very good condition, but if you are not entirely satisfied please get in touch with us.