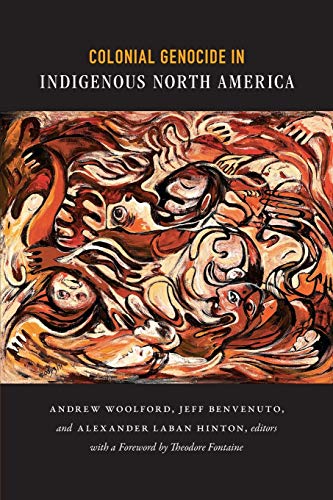 In Stock
£17.99
This important collection of essays expands the geographic, demographic, and analytic scope of the term genocide to encompass the effects of colonialism and settler colonialism in North America.
Very Good
Only 1 left

This important collection of essays expands the geographic, demographic, and analytic scope of the term genocide to encompass the effects of colonialism and settler colonialism in North America. Colonists made multiple and interconnected attempts to destroy Indigenous peoples as groups. The contributors examine these efforts through the lens of genocide. Considering some of the most destructive aspects of the colonization and subsequent settlement of North America, several essays address Indigenous boarding school systems imposed by both the Canadian and U.S. governments in attempts to "civilize" or "assimilate" Indigenous children. Contributors examine some of the most egregious assaults on Indigenous peoples and the natural environment, including massacres, land appropriation, the spread of disease, the near-extinction of the buffalo, and forced political restructuring of Indigenous communities. Assessing the record of these appalling events, the contributors maintain that North Americans must reckon with colonial and settler colonial attempts to annihilate Indigenous peoples.

"This is a welcome addition to the ongoing discussions in the increasingly sophisticated literature that explores the applicability, extent, and lasting significance of genocide in North America.... The editors deserve praise for the comparative dimensions of the volume, which look across time and space in North America and rightly anchor their project in the emerging field of critical genocide studies.... Highly recommended." -- C. R. King * Choice *
"Colonial Genocide in Indigenous North America is a welcome revision of the long history of colonialism in North America... [It] could be used in undergraduate history courses to great effect." -- Garrett W. Wright * The History Teacher *
"This volume provides a wide ranging perspective on current research and ongoing debates regarding colonial genocide in North America - highlighting a great diversity of approaches and conclusions and demonstrating the courage of those within the field to push the limits of prevailing understandings. The volume is all the more valuable for its inclusion of the research and findings of Indigenous scholars." -- Kerry A. Bailey * Ethnic and Racial Studies *
"In challenging fellow scholars, indigenous communities and wider society with the question of what genocide is, the contributors to this important collection have done a great service, presenting new ways of conceptualizing and perhaps reconciling our collective and often dark past with what could be a brighter future together." -- James Daschuk * Journal of Colonialism and Colonial History *
"Colonial Genocide in Indigenous North America offers powerful and profound insights into the widespread and abundant abuse of genocide by European colonists and American and Canadian citizens and their governments toward indigenous peoples." -- Joel R. Hyer * Western Historical Quarterly *
"For anyone curious about the true impact of Manifest Destiny, colonial expansionism, and settler societies, this book will open eyes and introduce an often-ignored reality.... This timely and valuable contribution will undoubtedly inform these debates and add to our understanding of the ways in which the destructive and often genocidal colonial practices and policies impacted the Indigenous populations of Canada and the United States." -- Stefanie Kunze * The Canadian Journal of Native Studies *
"What a timely anthology!... Such a survey is useful both for scholars who are fully engaged in genocide studies already and for those who want to consider how the field may apply to their research. More broadly, this volume could be a great benefit to scholars of genocide from outside North America who are looking for an up-to-date overview of the field for comparative purposes." -- Brenden W. Rensink * Ethnohistory *
"This tightly packed anthology not only reviews the contemporary issues of and positions on colonial genocide in North America, but stands as a wedge of discourse around the histories and interpretations of group destruction as part of the civilizing project.... Woolford, Benvenuto, and Hinton's collection serves to challenge the so-called Pax Americana of peaceful assimilation in a not quite post-colonial North America." -- Christopher Davey * Genocide Studies and Prevention *
"Colonial Genocide in Indigenous North America contributes to a growing chorus of indigenous scholars, genocide analysts, and Native leaders who are bringing this most important topic into greater clarity, and makes an excellent resource for academics and university courses to launch that discussion. I encourage you to read and utilize the work, continuing the rise of indigenous voices about genocide." -- James V. Fenelon * American Indian Culture and Research Journal *
"This book deserves consideration by all historians whose work touches even tangentially on indigenous peoples and by those interested in genocide globally. Whether readers are skeptical of the term's relevance in North America, or are engaged in debates not over if but how and when the term is deserved, this book merits their attention." -- Paige Raibmon * Journal of American History *

About Edited by Alexander Laban Hinton

Andrew Woolford is Professor of Sociology and Criminology and Social Justice Research Coordinator at the University of Manitoba.

Jeff Benvenuto is a Ph.D. student in the Division of Global Affairs at Rutgers University, Newark.

Alexander Laban Hinton is the Director of the Center for the Study of Genocide and Human Rights, Professor of Anthropology and Global Affairs, and the UNESCO Chair on Genocide Prevention at Rutgers University, Newark.

Theodore Fontaine is the author of Broken Circle: The Dark Legacy of Indian Residential Schools: A Memoir.

GOR010301002
Colonial Genocide in Indigenous North America by Edited by Alexander Laban Hinton
Edited by Alexander Laban Hinton
Used - Very Good
Paperback
Duke University Press
2014-10-31
360
0822357798
9780822357797
N/A
Book picture is for illustrative purposes only, actual binding, cover or edition may vary.
This is a used book - there is no escaping the fact it has been read by someone else and it will show signs of wear and previous use. Overall we expect it to be in very good condition, but if you are not entirely satisfied please get in touch with us.