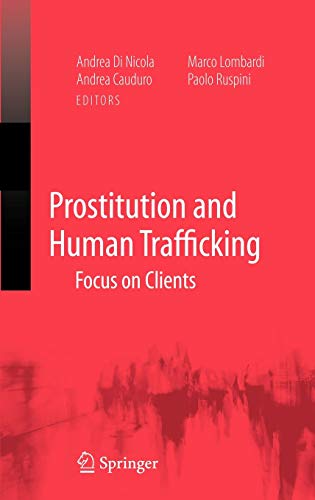 Prostitution and Human Trafficking
by Edited by Andrea Di Nicola

Prostitution and Human Trafficking: Focus on Clients by Edited by Andrea Di Nicola

Andrea Cauduro, Andrea Di Nicola, Marco Lombardi, and Paolo Ruspini Client: Have you ever had a [...] by an Albanian? Researcher: No... Client: You should have one, they're great! "I'll tell you something: between an exploited girl and a 'free' one, I choose the exploited one. Because a girl who's being exploited has to give money to her pimp, otherwise she'll be beaten. The others, when they've earned enough they stop working. The exploited ones no: even they don't want to work, they have to stay there and if they don't pay the pimp they're beaten [...] If you think about it, you notice it is more a help than anything else. We all know they're exploited, so it's better to go with them, otherwise they'll be slaughtered!" These two tough excerpts from interviews with clients of foreign prostitution stress the core point of this work: There seems to be a different view, a different logic that moves these men in their search for commercial sex. This is the focus of the discussion and the main reason for this volume. We have attempted to study the phenomenon of trafficking from a different and innovative perspective: the demand. Trafficking in human beings for sexual exploitation (and not only) has involved all the European Union and more in general Western European countries in the past twenty years.

About Edited by Andrea Di Nicola

Andrea Cauduro is a researcher at Transcrime and a Ph.D. candidate in criminology at the Catholic University in Milan (final discussion foreseen in february 2008). In 2004 he graduated in law with a final dissertation in criminology on trafficking in human beings in the EU. Since then he has been participating as a researcher in several EU financed research projects on this topic. In addition, he has been extensively writing in national and international books and scientific articles, participating as a speaker at some international conferences and has held some lectures at the University of Trento. Finally, since 2007 he has been cooperating with the International Organization for Migration (IOM) as an expert on trafficking in human beings.

Marco Lombardi is associated professor at the Faculty of Humanities, Catholic University, Milan, teaching Sociology, Theory and Technique of mass communication and Crisis management. He is member of the board of the Ph.D. School of the Faculty of Sociology, director of the Master in Communication of the High School of Communication, director of ITSTIME project (Italian Team for Security Terroristic Issues & Managing Emergencies) member of the board of the Master in Urban Security, member of board of the International Ph.D. in Criminology, member of the board of the Master in International Emergencies Management, faculty of Psychology. He is author of various publications: "Il Kashmir e sempre piu caldo", in Liberal Risk, 2007; An Italian Village, Dreams Creek, Milan 2006; Comunicare nell'emergenza, Vita e Pensiero, Milan 2005; La comunicazione dei rischi naturali, Vita e Pensiero, Milan 2005; "How to Achieve a Real Pacification Amongst the Iraqi Communities?", in The New Iraq, Landau 2005; "Comments on Al-Qaeda's terrorism and the nuclear threat", in Acque & Terre, 2004.

Paolo Ruspini (PhD, Milan) is Senior researcher at the Faculty of Communication Sciences of the University of Lugano, Switzerland, as well as Associate Fellow at the Centre for Research in Ethnic Relations (CRER) of the University of Warwick, United Kingdom. A political scientist, he has been researching issues of international and European migration and integration with a comparative approach and by drawing on policy and some qualitative analyses. He is an active member of some of the most important European research networks regarding international migration and social cohesion as well as being a consultant for national and international institutions. In the year 2001, Ruspini received a Marie Curie post-doctoral fellowship for his project "Living on the Edge: Irregular Migrants in Europe" and he also received a grant for holding the position of principal investigator at CRER for the research project in collaboration with the Centre of Migration Research of Warsaw University "In Search for a New Europe: Contrasting Migratory Experiences" (2001-2005). Paolo Ruspini was visiting scholar at the Mershon Center for Education, Ohio State University (1998) and worked for the United Nations Industrial Development Organisation (1995-1996). He combines research activities with routine lectures at a post-graduate level in a number of universities and international institutions. He is author of Migration in the New Europe: East-West Revisited (2004, Palgrave-Macmillan, co-edited with A. Gorny) as well as various publications on migration.

GOR010197813
Prostitution and Human Trafficking: Focus on Clients by Edited by Andrea Di Nicola
Edited by Andrea Di Nicola
Used - Very Good
Hardback
Springer-Verlag New York Inc.
2008-10-27
256
038773628X
9780387736280
N/A
Book picture is for illustrative purposes only, actual binding, cover or edition may vary.
This is a used book - there is no escaping the fact it has been read by someone else and it will show signs of wear and previous use. Overall we expect it to be in very good condition, but if you are not entirely satisfied please get in touch with us.