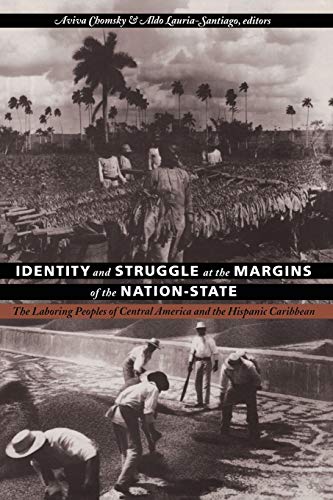 In Stock
£5.99
Brings together research on the social history of Central America and the Spanish-speaking Caribbean during the late nineteenth and early twentieth centuries.
Very Good
Only 1 left

Identity and Struggle at the Margins of the Nation-State Summary

Identity and Struggle at the Margins of the Nation-State: The Laboring Peoples of Central America and the Hispanic Caribbean by Edited by Aviva Chomsky

Identity and Struggle at the Margins of the Nation-State brings together new research on the social history of Central America and the Spanish-speaking Caribbean during the late nineteenth and early twentieth centuries. Aviva Chomsky and Aldo A. Lauria Santiago have gathered both well-known and emerging scholars to demonstrate how the actions and ideas of rural workers, peasants, migrants, and women formed an integral part of the growth of the export economies of the era and to examine the underacknowledged impact such groups had on the shaping of national histories.
Responding to the fact that the more common, elite-centered "national" histories distort or erase the importance of gender, race, ethnicity, popular consciousness, and identity, contributors to this volume correct this imbalance by moving these previously overlooked issues to the center of historical research and analysis. In so doing, they describe how these marginalized working peoples of the Hispanic Caribbean Basin managed to remain centered on not only class-based issues but on a sense of community, a desire for dignity, and a struggle for access to resources. Individual essays include discussions of plantation justice in Guatemala, highland Indians in Nicaragua, the effects of foreign corporations in Costa Rica, coffee production in El Salvador, banana workers in Honduras, sexuality and working-class feminism in Puerto Rico, the Cuban sugar industry, agrarian reform in the Dominican Republic, and finally, potential directions for future research and historiography on Central America and the Caribbean.
This collection will have a wide audience among Caribbeanists and Central Americanists, as well as students of gender studies, and labor, social, Latin American, and agrarian history.

Identity and Struggle at the Margins of the Nation-State Reviews

"This collection gives us a much more nuanced view of labor in these regions than previously available. Using archives and oral history, the writers successfully break through the screen of elite-centered history into the world of the masses."-David McCreery, Georgia State University
"This volume does an exceptional job of bringing together in a single volume very substantial new research on working people and their history in the Hispanic Caribbean Basin."-Ralph Lee Woodward Jr., Tulane University

About Edited by Aviva Chomsky

Aviva Chomsky is Professor of History at Salem State College and author of West Indian Workers and the United Fruit Company in Costa Rica, 1870-1940.

Aldo A. Lauria Santiago is Assistant Professor of History at the College of the Holy Cross.

GOR010200969
Identity and Struggle at the Margins of the Nation-State: The Laboring Peoples of Central America and the Hispanic Caribbean by Edited by Aviva Chomsky
Edited by Aviva Chomsky
Comparative and International Working-Class History
Used - Very Good
Paperback
Duke University Press
1998-08-05
416
0822322188
9780822322184
N/A
Book picture is for illustrative purposes only, actual binding, cover or edition may vary.
This is a used book - there is no escaping the fact it has been read by someone else and it will show signs of wear and previous use. Overall we expect it to be in very good condition, but if you are not entirely satisfied please get in touch with us.