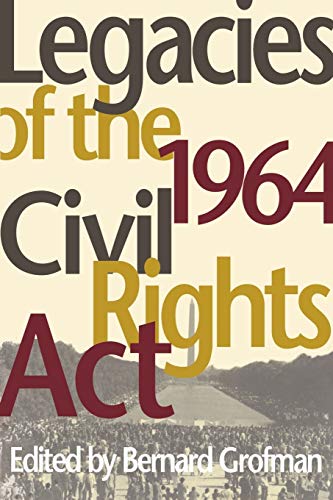 In Stock
£28.99
An analysis of the 1964 Civil Rights Act. The editor, Bernard Grofman, asked the contributors - political scientists, historians, lawyers, statisticians and sociologists - to stand back from the immediate controversies and provide historical and comparative perspective about the Act.
Very Good
Only 1 left

The 1964 Civil Rights Act, in conjunction with the Voting Rights Act of the following year, totally transformed the shape of American race relations. Supporters of the Civil Rights Act sought, at minimum, the elimination of racial segregation in publicly supported schools, hospitals, public transport, and other public spaces, and an end to open and blatant racial discrimination in employment practices.

Judged in those terms, the act is a remarkable success story. It has shown the power of the central government to change deeply entrenched patterns of behavior. In terms of the law, blacks are no longer second-class citizens. From other perspectives, however, the act is seen as a failure. Either it went too far, by institutionalizing race-specific forms of preferences, or it did not go far enough, leaving untouched the socioeconomic differences and lingering effects of past discrimination that perpetuate race-based inequities.

Legacies of the 1964 Civil Rights Act brings together a distinguished group of political scientists, historians, lawyers, statisticians, and sociologists who have written extensively on civil rights issues. The editor, Bernard Grofman, has asked the contributors to stand back from the immediate controversies about civil rights reflected in today's news and to provide historical and comparative perspective about this important legislation. Organized into four sections, the book covers the origins of the act and its historical evolution, its consequences in several different policy domains, and the future of civil rights in the United States. An appendix contains two somewhat more technical essays on legal standards for statutory violations and statistical issues in measuring discrimination.

Because the moral urgency of the Civil Rights Act of 1964 was triggered by revulsion against racial segregation, the act's legacy is primarily seen in the life chances of African Americans. This volume provides a broad and detailed picture of the act's impact on African Americans' lives.

About Edited by Bernard Grofman

Bernard Grofman, Professor of Political Science and Social Psychology at the University of California, Irvine, is the author or editor of numerous books on voting equality.

GOR010303697
Legacies of the 1964 Civil Rights Act by Edited by Bernard Grofman
Edited by Bernard Grofman
Race, Ethnicity & Politics
Used - Very Good
Paperback
University of Virginia Press
2000-04-29
320
0813919215
9780813919218
N/A
Book picture is for illustrative purposes only, actual binding, cover or edition may vary.
This is a used book - there is no escaping the fact it has been read by someone else and it will show signs of wear and previous use. Overall we expect it to be in very good condition, but if you are not entirely satisfied please get in touch with us.