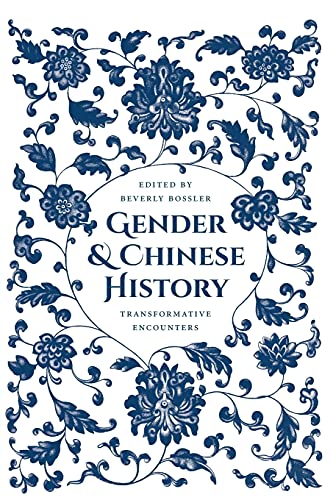 Gender and Chinese History
by Edited by Beverly Jo Bossler

Until the 1980s, a common narrative about women in China had been one of victimization: women had dutifully endured a patriarchal civilization for thousands of years, living cloistered, uneducated lives separate from the larger social and cultural world, until they were liberated by political upheavals in the twentieth century. Rich scholarship on gender in China has since complicated the picture of women in Chinese society, revealing the roles women have played as active agents in their families, businesses, and artistic communities. The essays in this collection go further by assessing the ways in which the study of gender has changed our understanding of Chinese history and showing how the study of gender in China challenges our assumptions about China, the past, and gender itself.

This anthology sets a new benchmark for the creative and rigorous use of a broad range of sources to extend the scope of gender-focused enquiry in Chinese late imperial history. It will be read with benefit by students and scholars of comparative modernities, comparative gender issues, as well as Chinese social and political history.

This collection of groundbreaking essays delivers enough inspiration not only for expanding gender-related historic studies in new directions, but also for questioning some of the well-established assumptions within the academic field, as well as popular gender stereotypes.

Insightful and provoocative . . . This edited volume is an enlightening and delightful reading for a wide range of scholars.

About Edited by Beverly Jo Bossler

Beverly Bossler is professor of history at the University of California, Davis. She is the author of is Courtesans, Concubines, and the Cult of Female Fidelity in China, 1000-1400 and Powerful Relations: Kinship, Status, and the State in Sung China (960-1279). Other contributors are Gail Hershatter, Emily Honig, Joan Judge, Guotong Li, Weijing Lu, Ann Waltner, Yan Wang, Ellen Widmer, and Yulian Wu.

GOR009947440
Gender and Chinese History: Transformative Encounters by Edited by Beverly Jo Bossler
Edited by Beverly Jo Bossler
Used - Very Good
Paperback
University of Washington Press
2017-05-01
278
0295741775
9780295741772
N/A
Book picture is for illustrative purposes only, actual binding, cover or edition may vary.
This is a used book - there is no escaping the fact it has been read by someone else and it will show signs of wear and previous use. Overall we expect it to be in very good condition, but if you are not entirely satisfied please get in touch with us.