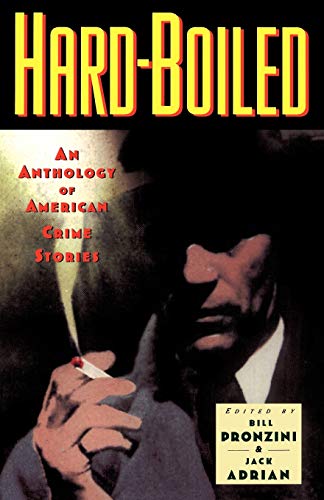 Hard-boiled
by Edited by Bill Pronzini

In Stock
£15.99
Compellingly and compulsively readable, Hardboiled: An Anthology of American Crime Stories offers thirty-six superb stories that chronicle the evolution of this quintessentially American art form. Here are eight decades worth of the best writing about betrayal, murder, and mayhem: from Dashiell Hammett and Raymond Chandler to Faye Kellerman, Lawrence Block, and James Ellroy.
Very Good
Only 2 left

Hard-boiled: An Anthology of American Crime Stories by Edited by Bill Pronzini

What are the ingredients of a hard-boiled detective story? `Savagery, style, sophistication, sleuthing and sex,' said Ellery Queen. Often a desperate blonde, a jealous husband, and, of course, a tough-but-tender P.I. - the likes of Sam Spade or Philip Marlowe. These elements, typifying the gritty strain of American crime fiction termed `hard boiled', have profoundly influenced the public's imagination, both through the literary mainstream and through the many films based on hard-boiled fiction (The Maltese Falcon, Double Indemnity, The Postman Always Rings Twice etc.). Hard-boiled: An Anthology of American Crime Stories is the largest and most comprehensive collection of its kind, with over half of the stories never published before in book form. Included are thirty-six sublimely suspenseful stories that chronicle the evolution of this quintessentially American art form, from its beginnings in the 1920s to the present day. It contains stories by Dashiel Hammett, Raymond Chandler, and James M. Cain who wrote in the legendary pulp magazines of the 1920s to 1940s; as well as works by Mickey Spillane, Helen Nielse, Ross MacDonald, and Elmore Leonard, who wrote in digest-sized magazines during the 1950s and 1960s. Ten stories from the 1970s to 1990s, by writers such as Ed Gorman, Lawrence Block, and Faye Kellerman, demonstrate how the hard-boiled tradition has evolved over time. Compellingly and compulsively readable, Hardboiled: An Anthology of American Crime Stories is a pageturner no mystery lover will want to be without. Containing many notable rarities, it celebrates a genre that has profoundly shaped not only American literature and film, but how we see ourselves and our heroes.

an anthology of consistently high quality, full of forgotten gems alongside the famous names, and a potent reminder that it's a noir, noir world. * John Williams, The Mail on Sunday *
One of the best anthologies ever to trace the hard-nosed, amoral school of American short crime fiction. * Mike Ripley, Daily Telegraph *

About Edited by Bill Pronzini

Jack Adrian is an authority on popular and genre fiction in the twentieth century, and is the author of many books, including anthologies such as Strange Tales from the Strand, Detective Stories from the Strand (both OUP, 1991). and The Oxford Book of Historical Short Stories (OUP, 1994). Bill Pronzini is a well-known mystery and suspense writer of over forty novels, and is best known as the creator of the `Nameless Detective' series. He served as the first president of the Private Eye Writers of America, and won that organization's Lifetime Achievement Award in 1987.

GOR001175130
Hard-boiled: An Anthology of American Crime Stories by Edited by Bill Pronzini
Edited by Bill Pronzini
Used - Very Good
Paperback
Oxford University Press Inc
1997-09-01
540
019510353X
9780195103533
N/A
Book picture is for illustrative purposes only, actual binding, cover or edition may vary.
This is a used book - there is no escaping the fact it has been read by someone else and it will show signs of wear and previous use. Overall we expect it to be in very good condition, but if you are not entirely satisfied please get in touch with us.