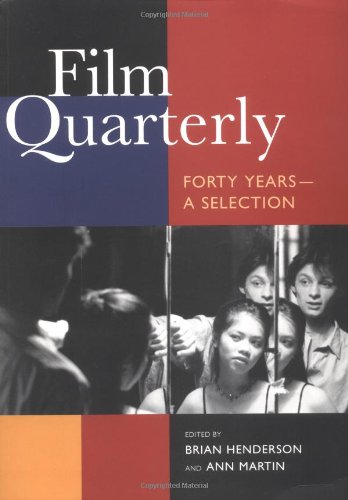 In Stock
£5.99
Spanning the 1950s to the 1990s, this volume is a collaborative effort by past and present editors of "Film Quarterly" to celebrate and illuminate the medium that has prompted so much thought and exchange during the journal's lifetime.
Very Good
Only 1 left

During its forty years as a forum for scholars, filmmakers, critics, and film lovers, Film Quarterly has looked in depth at the most critical elements in the political, social, theoretical, and aesthetic history of the cinema. Once closely tied to Hollywood, the journal was investigated by the Tenney committee in 1946 and two of its board members came under fire from the House Un-American Activities Committee in 1951. After several metamorphoses, however, and with the dedicated participation of its editors, board members, and authors, the journal now stands as the oldest and most prominent journal in cinema studies, publishing film (and video and television) history, criticism, theory, analysis, interviews, and film and book reviews.

Spanning the 1950s to the 1990s, Film Quarterly: Forty Years A Selection is a collaborative effort by the past and present editors and the editorial board to celebrate and illuminate the medium that has prompted so much thought and exchange during the journal's lifetime. From articles on documentary and genre to history and technology, narrative and the avant-garde, this carefully selected collection proposes groundbreaking theoretical models, fresh approaches to individual film classics, reassessments of filmmakers' bodies of work, and discussions of new films and technologies.

"For 40 years, Film Quartlerly magazine has been a touchstone for film buffs and professionals alike, making it a must-read for anyone who thinks the way images and stories are framed on celluloid is just as important as the finished product." Here in this volume, some of the most intriguing, thought-provoking articles are aligned in seven sections, including theory, genre, documentary and historical revisions. . . . This volume is non-stop fascination."--Chico News and Reviews

About Edited by Brian Henderson

Brian Henderson is Professor of Film at the State University of New York, Buffalo, and has been a member of the Film Quarterly editorial board since 1973. His books include A Critique of Film Theory (1980) and two volumes of screenplays by Preston Sturges. Ann Martin has been the editor of Film Quarterly since 1991. She has worked for The New Yorker and American Film magazine; she was also a member of the American Film Institute's Education Program, where she was the first Series Editor of the AFI Monographs.

GOR002650176
Film Quarterly: Forty Years A Selection by Edited by Brian Henderson
Edited by Brian Henderson
Used - Very Good
Paperback
University of California Press
1999-05-18
583
0520216032
9780520216037
N/A
Book picture is for illustrative purposes only, actual binding, cover or edition may vary.
This is a used book - there is no escaping the fact it has been read by someone else and it will show signs of wear and previous use. Overall we expect it to be in very good condition, but if you are not entirely satisfied please get in touch with us.