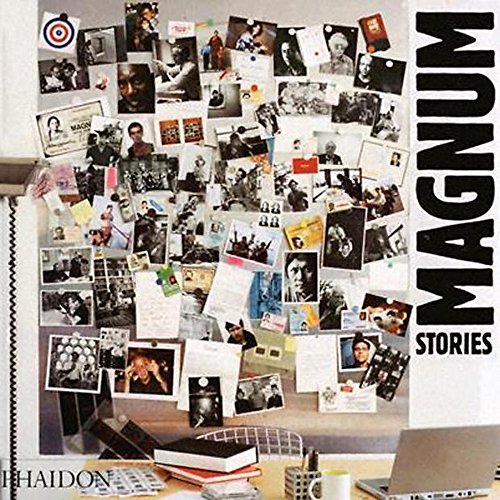 Magnum Stories is a collection of the best photo stories produced by the photographers of Magnum.

Through the work of key Magnum photographers - including Henri Cartier-Bresson, Robert Capa, Eugene Richards, Martin Parr, Inge Morath and Leonard Freed - this book covers a wide range of subjects, from the Vietnam War to student protests in Tiananmen Square, Fidel Castro overthrowing the Cuban dictator in 1959, Picasso, Malcolm X, the French theatre group Theatre du Soleil, the US invasion of Grenada in the early 1980s, the New York police, Apartheid and Buddhism. This momentous compilation combines war photography, documentary, photojournalism, social realism, portraits of people and places, fashion and news. 61 Magnum photographers are featured, each of whom is represented across eight pages by a fully illustrated photo story of their choice, and a text composed from the photographer's perspective and based directly on interviews.

The texts are sophisticated and idiosyncratic - each with its own distinctive voice and style - yet accessible and engaging to read. They reveal strikingly diverse perceptions and approaches to the practice and philosophy of photography: What is the photo story? What does it mean? How did it come into being, and why? The questions raised are endless; each answer given is more arresting than the last.

As well as featuring the work of individual photographers, this landmark book embodies a rigorous interrogation of the form of the photo story itself as the key vehicle for photography in the twentieth century. The in-depth introduction brings this essential form to life: from its earliest developments in the 1930s, through the 'death of photojournalism', to its multi-faceted and multiplying manifestations today. The sweeping scope of Magnum Stories explores, with passion and erudition, the various influences that have defined the photo story as its own genre, spanning key twentieth-century events and the life of photographic magazines such as Newsweek, Time and Paris Match.

An unprecedented reflection of the course of the twentieth-century and the opening of the twenty-first - all through the lens of a camera on the go - this book is an intellectual, historical and aesthetic tour de force.

"Marvellous... How some of the world's best pictures were taken, edited and laid out in order to make the perfect statement."-The Sunday Times

"Gives us an inside-out look at how history is recorded. More than 60 photographers tell firsthand about shooting a favourite story, in their own words, and illustrated with famous images as well as some never-before-seen."-Black & White Magazine

"The kaleidoscope of world events and prominent figures found within these pages is astounding... The value of this book can be fully fathomed when one realizes that much of the general population experiences history through photographs, which in turn shapes human memory."-Library Journal

"The length of the stories and the essays gives them an uncommonly personal feel and lends humanity to a body of work normally encountered as anonymous, dislocated images. Figuratively and literally a heavyweight title."-Arena

"Scorching, poignant, devastating, serene, playful, Magnum's powerful images always leave an imprint on the mind... The perfect manual to realise the dynamics and success of this intriguing organisation. If any of their publications represents their ideals and idiosyncrasy, this is it. Like the agency itself, this book is unique. Not only beautiful, these photographs also convey the depth and intelligence with which each photographer has treated his chosen subject. Page after page of extraordinary images ... A feast of stunning iconic images... The vision, dedication and defiance on these pages are the latest example of Magnum doing things their own way. As the late Henri Cartier-Bresson urged his fellow members: "Vive la revolution permanente!". It seems they are listening still."-Elaine Livingstone, picture editor, Sunday Herald

"Gives the reader some fascinating insights into [the photographers'] work... With so many interesting stories to tell, Magnum Stories runs to over 500 pages. GBP40 [sic] seems a small price to pay for an extraordinary book."-British Journal of Photography

"Such is the pre-eminence of Magnum Photos, that this history of the agency almost serves as a history of photojournalism for the second half of the 20th century."-RPS (Royal Photographic Society Journal)

"Impressive, instructive and profound... An invaluable tool which should be on every picture researcher's shelf."-Montage (The magazine of the Picture Research Association)

"This mighty tome demands to be taken seriously. Magnum are the originals, the auteurs, the most committed of the photojournalists, and they demand respect... [A] masterwork."-foto8 (Photojournalism magazine)

"In a society bombarded with imagery, this book is a timely reminder of the power of documentary still photography."-Maclean's

"A marvelous new photo collection is Magnum Stories, which profiles photographers from the legendary agency founded by Henri Cartier-Bresson and Robert Capa."-Business Week

"It is the season for books that cause back strain. This year's 10 lb. plus coffee-table tomes include Magnum Stories, a visual history of the Magnum photography agency... The book combines essays and photos of 61 photographers from the past six decades."-The Wall Street Journal

"There's a great story here - actually 61 stories. Boot has structured a book that is fresh, inviting, and provocative."-Christian Science Monitor

About Edited by Chris Boot

Chris Boot is an independent photography writer and editor of both books and exhibitions. He joined Magnum Photos in 1990: after eight years he became Director of Magnum London in 1993, and subsequently Director of Magnum New York in 1996. In 1998, he joined Phaidon Press as Editorial Director of Photography. His recent projects include Gideon Mendel, A Broken Landscape (2001), Here is New York - A Democracy of Photographs (2002), Our True Intent Is All For Your Delight - the John Hinde Butlin's Photographs (2002) and Collecting Photography (2003).

GOR004780471
Magnum Stories by Edited by Chris Boot
Edited by Chris Boot
Used - Very Good
Hardback
Phaidon Press Ltd
2004-11-15
512
0714842451
9780714842455
N/A
Book picture is for illustrative purposes only, actual binding, cover or edition may vary.
This is a used book - there is no escaping the fact it has been read by someone else and it will show signs of wear and previous use. Overall we expect it to be in very good condition, but if you are not entirely satisfied please get in touch with us.