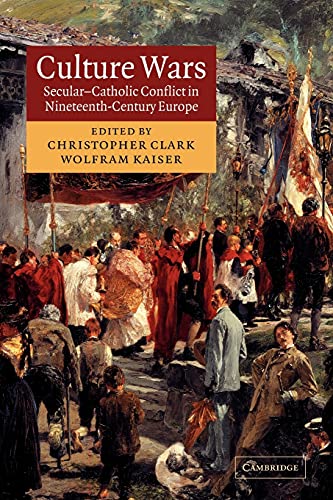 In Stock
£20.99
This book is about the struggle that broke out between secular and religious forces in late nineteenth-century Europe. With its genuinely European focus and its innovative approach, this volume offers a fresh and revealing perspective on one of the main formative conflicts of modern European history.
Very Good
Only 1 left

Across nineteenth-century Europe, the emergence of constitutional and democratic nation-states was accompanied by intense conflict between Catholics and anticlerical forces. At its peak, this conflict touched virtually every sphere of social life: schools, universities, the press, marriage and gender relations, burial rites, associational culture, the control of public space, folk memory and the symbols of nationhood. In short, these conflicts were 'culture wars', in which the values and collective practices of modern life were at stake. These 'culture wars' have generally been seen as a chapter in the history of specific nation-states. Yet it has recently become increasingly clear that the Europe of the mid- and later nineteenth century should also be seen as a common politico-cultural space. This book breaks with the conventional approach by setting developments in specific states within an all-European and comparative context, offering a fresh and revealing perspective on one of modernity's formative conflicts.

'... succeed[s] in raising some fascinating questions about the religious history of Europe.' Church of England Newspaper
'This collection makes an extremely valuable contribution to our understanding of one of the nineteenth century's most important developments.' Contemporary Review
'... fascinating reading ... the indispensable work on a neglected subject.' Diocese of Brandon Review
' ... an excellent teaching volume, more useful in many ways than some of the more narrowly focused texts of a particular national field.' Catholic Books Review
'... an excellent teaching volume ...'. H-France Book Reviews
'The editors should be commended for assembling an impressively balanced collection ... all contributors reach high standards of research and exposition.' History
'...the editors of Culture Wars are to be congratulated for having brought together so many illuminating cases in such a coherent fashion ... Culture Wars is likely to become essential reading for advanced university courses on nineteenth-century European history.' Nations and Nationalism
"An excellent teaching volume. Especially useful are contributions on the culture wars in smaller or more remote European countries that are often neglected in narratives of nineteenth century Europe." H-FRANCE
"There is no other work that brings together so much useful information..." History
"A welcome historical perspective on the European religous experience that lead to the modern secular period where the wall remains high between Church and State." Catholic Books review
"The breadth of its coverage ... make[s] it a valuable contribution to the literature.... For students of European Catholicism and confessional history." The Catholic Historical Review

About Edited by Christopher Clark

Dr Christopher Clark is Lecturer in Modern European History at the University of Cambridge. Wolfram Kaiser is Professor of European Studies at the University of Portsmouth, UK, and Visiting Professor at the College of Europe in Bruges, Belgium. He has published numerous books, journal articles and book chapters, especially in the field of European Union history and politics, Christian democracy and the history of globalisation.

GOR010300173
Culture Wars: Secular-Catholic Conflict in Nineteenth-Century Europe by Edited by Christopher Clark
Edited by Christopher Clark
Used - Very Good
Paperback
Cambridge University Press
2009-04-09
380
0521108454
9780521108454
N/A
Book picture is for illustrative purposes only, actual binding, cover or edition may vary.
This is a used book - there is no escaping the fact it has been read by someone else and it will show signs of wear and previous use. Overall we expect it to be in very good condition, but if you are not entirely satisfied please get in touch with us.