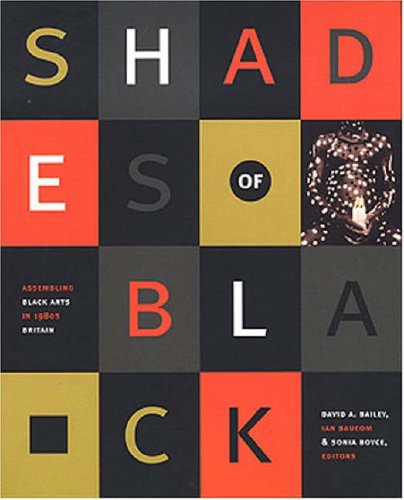 Shades of Black
by Edited by David A. Bailey

In Stock
£19.99
In the 1980s - at the height of Thatcherism and in the wake of civil unrest and rioting in a number of British cities - the Black Arts Movement burst onto the British art scene with breathtaking intensity, changing the nature and perception of British culture irreversibly. This volume presents a history of that movement.
Very Good
Only 1 left

Shades of Black: Assembling Black Arts in 1980s Britain by Edited by David A. Bailey

In the 1980s-at the height of Thatcherism and in the wake of civil unrest and rioting in a number of British cities-the Black Arts Movement burst onto the British art scene with breathtaking intensity, changing the nature and perception of British culture irreversibly. This richly illustrated volume presents a history of that movement. It brings together in a lively dialogue leading artists, curators, art historians, and critics, many of whom were actively involved in the Black Arts Movement. Combining cultural theory with anecdote and experience, the contributors debate how the work of the black British artists of the 1980s should be viewed historically. They consider the political, cultural, and artistic developments that sparked the movement even as they explore the extent to which such a diverse body of work can be said to constitute a distinct artistic movement-particularly given that "black" in Britain in the 1980s encompassed those of South Asian, North and sub-Saharan African, and Caribbean descent, referring as much to shared experiences of disenfranchisement as to shades of skin.

In thirteen original essays, the contributors examine the movement in relation to artistic practice, public funding, and the transnational art market and consider its legacy for today's artists and activists. The volume includes a unique catalog of images, an extensive list of suggested readings, and a descriptive timeline situating the movement vis-a-vis relevant artworks and films, exhibitions, cultural criticism, and political events from 1960 to 2000. A dynamic living archive of conversations, texts, and images, Shades of Black will be an essential resource.

"Shades of Black is a remarkable document of creative thinking and archival importance. The editors have brought to life a decade rich in artistic experimentation and collaboration, which will shape the vision of artists and thinkers across generations and geographies."-Homi K. Bhabha, Anne F. Rothenberg Professor of English and American Literature, Harvard University
"Shades of Black is an invaluable text for anyone and everyone in diaspora studies, cultural studies, and comparative British and American studies and for historians and critics of visual art. It brings together a wide range of visual art with a superb collection of essays that set the historical and critical context for understanding one of the most vibrant moments in art history."-Hazel V. Carby, author of Cultures in Babylon: Black Britain and African America
"The explosion of creativity and the critical debates on black culture that emerged in Britain in the 1980s transformed reigning assumptions about black art around the world. This collection is an important effort to assess the work of that period and its lasting impact."-Coco Fusco, interdisciplinary artist and Associate Professor of Visual Arts, Columbia University

About Edited by David A. Bailey

David A. Bailey is a photographer and Senior Curator at Autograph ABP in London. He is coeditor of Veil: Veiling, Representation, and Contemporary Art and Rhapsodies in Black: Art of the Harlem Renaissance.

Ian Baucom is Associate Professor of English at Duke University. He is the author of Out of Place: Englishness, Empire, and the Locations of Identity and Specters of the Atlantic: Finance Capital, Slavery, and the Philosophy of History (forthcoming from Duke University Press).

Sonia Boyce is an internationally renowned visual artist. She is Associate Lecturer in Fine Art at Central Saint Martin's School of Art and Design at the University of the Arts, London. She was a co-director of the African and Asian Visual Artists Archive at the University of East London (1996-2002).

GOR004722610
Shades of Black: Assembling Black Arts in 1980s Britain by Edited by David A. Bailey
Edited by David A. Bailey
Used - Very Good
Paperback
Duke University Press
2005-04-11
368
0822334208
9780822334200
N/A
Book picture is for illustrative purposes only, actual binding, cover or edition may vary.
This is a used book - there is no escaping the fact it has been read by someone else and it will show signs of wear and previous use. Overall we expect it to be in very good condition, but if you are not entirely satisfied please get in touch with us.