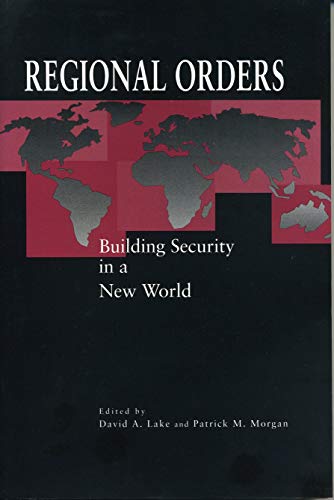 Regional Orders
by Edited by David A. Lake

In Stock
£30.99
This text studies how states in differing regions of the world are taking more control over their own affairs. It argues that universal principles of foreign policy are dangerous as regional orders differ, and policy must accommodate these differences if it is to succeed.
Very Good
Only 1 left

Regional Orders: Building Security in a New World by Edited by David A. Lake

Conflict among nations for forty-five years after World War II was dominated by the major bipolar struggle between the United States and the Soviet Union. With the end of the Cold War; states in differing legions of the world are taking their affairs more into their own hands and working out new arrangements for security that best suit their needs. This trend toward new "regional orders" is the subject of this book, which seeks both to document the emergence and strengthening of these new regional arrangements and to show how international relations theory needs to be modified to take adequate account of their salience in the world today.

Rather than treat international politics as everywhere the same, or each region as unique, this hook adopts a comparative approach. It recognizes that, while regions vary widely in their characteristics, comparative analysis requires a common typology and set of causal variables. It presents theories of regional order that both generalize about regions and predict different patterns of conflict and cooperation from their individual traits.

The editors conclude that, in the new world of regional orders, the quest for universal principles of foreign policy by great powers like the United States is chimerical and dangerous. Regional orders differ, and policy artist accommodate these differences if it is to succeed.

"Regional Orders is a welcome and needed contribution to understanding international politics in the post-Cold War era."

About Edited by David A. Lake

David A. Lake is Professor of Political Science at the University of California, San Diego.

Patrick M. Morgan is Professor of Political Science at the University of California, Irvine.

GOR004683431
Regional Orders: Building Security in a New World by Edited by David A. Lake
Edited by David A. Lake
Used - Very Good
Paperback
Pennsylvania State University Press
1997-08-05
424
027101704X
9780271017044
N/A
Book picture is for illustrative purposes only, actual binding, cover or edition may vary.
This is a used book - there is no escaping the fact it has been read by someone else and it will show signs of wear and previous use. Overall we expect it to be in very good condition, but if you are not entirely satisfied please get in touch with us.