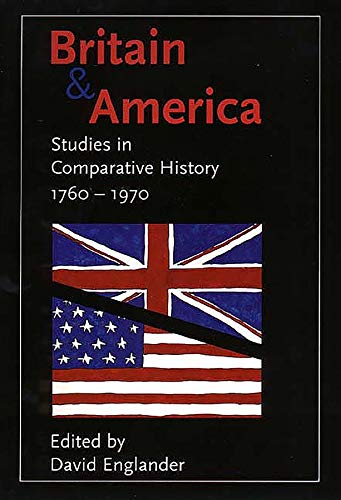 Britain and America
by Edited by David Englander

In Stock
£4.49
Compares and contrasts the historical course of Britain and America, exploring the significance of their similarities and differences over a period of two centuries. This book includes wide-ranging analyses of such issues as industrialization and urbanization, democracy and politics.
Very Good
Only 2 left

Britain and America: Studies in Comparative History, 1760-1970 by Edited by David Englander

Britain and the United States share a common language, a liberal and cultural heritage, and a democratic political system. They also have pronounced differences, for their economic, political, and social structures have developed in distinctive ways. This book compares and contrasts the historical course of the two countries and explores the significance of their similarities and differences over a period of two centuries.

The book offers wide ranging and up-to-date analyses of such issues as industrialization and urbanization, democracy and politics, class and gender, and citizenship and welfare. With contributions from leading scholars in both countries, it will be an invaluable resource for classrooms and seminar study, appealing to students of both history and social science. Some of the essays are classic expositions of debates that resonate on both sides of the Atlantic. Others are exemplary pieces that signal new agendas for research.

About Edited by David Englander

David Englander is senior lecturer in European Humanities Studies at the Open University, London. He is the author or editor of seven previous books.

GOR001143286
Britain and America: Studies in Comparative History, 1760-1970 by Edited by David Englander
Edited by David Englander
Used - Very Good
Paperback
Yale University Press
1997-01-02
336
0300069782
9780300069785
N/A
Book picture is for illustrative purposes only, actual binding, cover or edition may vary.
This is a used book - there is no escaping the fact it has been read by someone else and it will show signs of wear and previous use. Overall we expect it to be in very good condition, but if you are not entirely satisfied please get in touch with us.