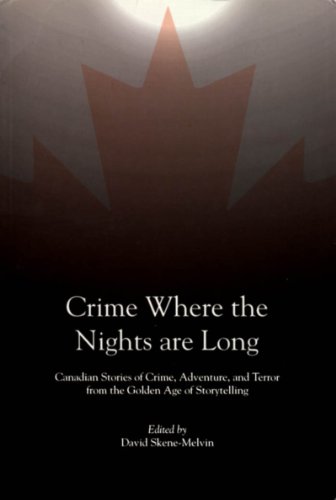 Stories and tales taken from collections and magazines from the period known as "The Age of the Storytellers."

Crime Where the Nights are Long Summary

Crime Where the Nights are Long: Canadian Stories of Crime and Adventure from the Golden Age of Storytelling by Edited by David Skene-Melvin

The period from the early 1880s through the First World War has been called "The Golden Age of the Storytellers." These were the writers who sought not to write great literature, but to entertain, spinning yarns to be printed and read, just as their predecessors, the minstrels and bards, recited and were listened to. Through their countless tales of adventure and derring-do they brought romance and colour to the lives of those who could do no more than dream. This was the age of Sir Arthur Conan Doyle, H. Rider Haggard, Rudyard Kipling, Robert Louis Stevenson, and H.G. Wells. Canadian writers contributed in no small way to the cornucopia of romance and adventure the reading public could find at the newsstands and bookstores. This is the period of which Messrs Roper, Beharriell, and Scheider in Literary History of Canada: Canadian Literature in English (2d ed., 1976) say "the Canadian fiction-writers between 1880 and 1920 were read more widely by their contemporaries, inside and outside Canada, than have been the Canadian fiction-writers - collectively - since." Literary historian David Skene-Melvin, the leading authority on Canadian criminous literature, has garnered from amongst the collections and magazines of the period a second anthology of stirring tales by Grant Allen, Robert Barr, Algernon Blackwood, W. H. Blake, Susan Carleton, William Henry Drummond, William Fraser, Harvey O'Higgins, Sir Gilbert Parker, Hesketh Pearson, Alan Sullivan, and others, some never before anthologized, guaranteed to set the blood a-racing and stimulate the imagination.

Crime Where the Nights are Long Reviews

"Real-life settings and circumstances that seem entirely plausible... Will appeal to those interested in stories about crimes committed in unusual settings."

About Edited by David Skene-Melvin

David Skene-Melvin has edited Crime in a Cold Climate (1994); Investigating Women: Female Detectives by Canadian Writers (1995); Bloody York: Tales of Mayhem, Murder, and Mystery in Toronto Past, Present, and Future (1996); and Secret Tales of the Arctic Trails: Stories of Crime and Adventure in Canada's Far North (1997) He is also the compiler, assisted by Norbert Spehner, of Canadian Crime Fiction 1817-1996: An Annotated Comprehensive Bibliography and Biographical Dictionary of Canadian Crime Writers (1996), covering both English and French-Canadian crime fiction, as well as co-compiler, with his wife Ann, of Crime, Detective, Espionage, Mystery, and Thriller Fiction & Film: A Comprehensive Bibliography of Critical Writing Through 1979 (1980). In addition, he has written numerous articles on and reviews of Canadian crime writing.

Foreword; The Huis and Where They Came From; The Formation of the Hui Zu; The Fate of the Hui During and After the Qing Dynasty; Further Assimilation of Minorities and its effects of Muslims; How the Hui Zu Lives in China; Influential Muslim Personalities; Admiral Zheng He and His Achievements; Contributions of the Chinese Muslims; The Staunchness of the Chinese Muslims.

GOR009953934
Crime Where the Nights are Long: Canadian Stories of Crime and Adventure from the Golden Age of Storytelling by Edited by David Skene-Melvin
Edited by David Skene-Melvin
Used - Very Good
Paperback
The Dundurn Group
1998-10-15
192
088924281X
9780889242814
N/A
Book picture is for illustrative purposes only, actual binding, cover or edition may vary.
This is a used book - there is no escaping the fact it has been read by someone else and it will show signs of wear and previous use. Overall we expect it to be in very good condition, but if you are not entirely satisfied please get in touch with us.