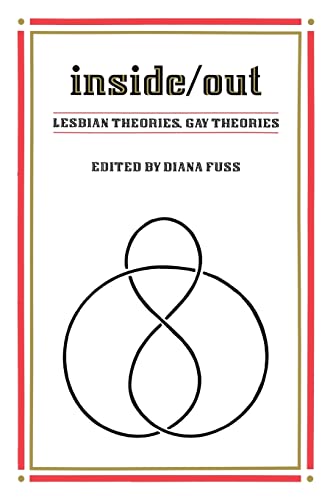 Inside/Out
by Edited by Diana Fuss

Lesbians and gays have gone from "coming out," to "acting up," to "outing," meanwhile radically redefining society's views on sexuality and gender. The essays in Inside/Out employ a variety of approaches (psychoanalysis, deconstruction, semiotics, and discourse theory) to investigate representations of sex and sexual difference in literature, film, video, music, and photography. Engaging the figures of divas, dykes, vampires and queens, the contributors address issues such as AIDS, pornography, pedagogy, authorship, and activism. Inside/Out shifts the focus from sex to sexual orientation, provoking a reconsideration of the concepts of the sexual and the political.

"This is the first anthology to offer full-strength, state-of-the-art lesbian and gay theory in all its immediacy, all its sophistication. Theory' means something new in the hands of these two generations of passionate activist/intellectuals --Eve Kosofsky Sedgwick, author of "Epistemology of the Closet."

GOR001064113
Inside/Out: Lesbian Theories, Gay Theories by Edited by Diana Fuss
Edited by Diana Fuss
Used - Very Good
Paperback
Taylor & Francis Ltd
1991-09-20
288
0415902371
9780415902373
N/A
Book picture is for illustrative purposes only, actual binding, cover or edition may vary.
This is a used book - there is no escaping the fact it has been read by someone else and it will show signs of wear and previous use. Overall we expect it to be in very good condition, but if you are not entirely satisfied please get in touch with us.