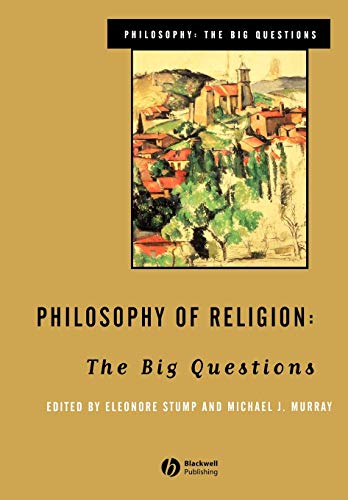 Philosophy of Religion
by Edited by Eleonore Stump

Philosophy of Religion: The Big Questions by Edited by Eleonore Stump

"More advanced students will find this a valuable collection." Jeff Astley, Theology "This book will help fill the need of those who want a collection of brief and generally interesting samples taken from what the editors find important in recent literature." David A. Pailin, The Expository Times "Representative in content, broad in scope, coherent in structure, rich in information, this superbly crafted anthology is a very useful and highly interesting presentation of the philosophy of religion. It may well become the standard anthology in this field." Keith Yandell, University of Wisconsin-Madison "Based on a variety of topics addressed and approaches taken by the essays' authors, as well as the quality of the selections, there is not a better collection for an upper-division philosophy of religion course to be found." Jon Kvanvig, Texas A & M University

About Edited by Eleonore Stump

Eleanore Stump, Robert J. Henle Professor of Philosophy at St. Louis University has published widely in the areas of Medieval philosophy, philosophy of religion, and metaphysics. She is also the current president of the Society of Christian Philosophers.

Michael Murray, Associate Professor of Philosophy at Franklin and Marshall College, works primarily in contemporary philosophy of religion and in early modern philosophy. He is currently a fellow at the Institute for Research in the Humanities at the University of Wisconsin-Madison.

1. What Would Anything Have To Be In Order To Be God? Omniscience. Omnipotence. Perfection. Eternity. 2. Can We Show By Reason That There Is A God? Ontological Argument. Cosmological Argument. Teleological Argument. The Evolutionary Anti-naturalism Argument. The Argument from Religious Experience. 3. Doesn't All The Evil In The World Show That There Is No God? The Problem. Defence. Theodicies. Alternative Perspectives. 4. What Is The Relation Of Reason To Religious Belief? Evidentialism. Religious Belief As Basic. Pascal's Wager. 5. Can We Make Sense Of Religious Doctrines And Practices Miracles? Prayer. Soul. Revelation. 6. Can Morality Have A Religious Foundation? 7. How Should Religion, Gender, And Ethnic Diversity Influence Our Thinking About Religion?

GOR003536244
Philosophy of Religion: The Big Questions by Edited by Eleonore Stump
Edited by Eleonore Stump
Philosophy: The Big Questions
Used - Well Read
Paperback
John Wiley and Sons Ltd
1999-01-08
502
0631206043
9780631206040
N/A
Book picture is for illustrative purposes only, actual binding, cover or edition may vary.
This is a used book. We do our best to provide good quality books for you to read, but there is no escaping the fact that it has been owned and read by someone else previously. Therefore it will show signs of wear and may be an ex library book.