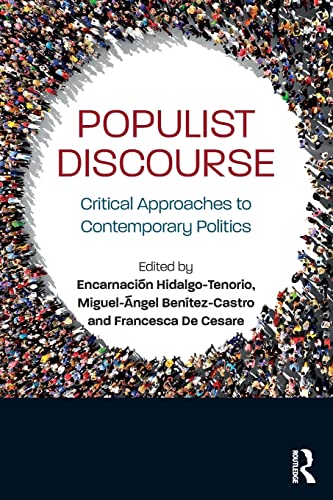 Populist Discourse brings together experts from both linguistics and political science to analyse the language of populist leaders and the media's representation of populism in different temporal, geographical and ideological contexts, including Nazi Germany, Sweden, the Netherlands, Spain, Italy, Portugal, Austria, Greece, the UK, the US and South America. With 17 contributions split into four sections, Populist Discourse covers a variety of approaches such as corpus-based discourse analysis, critical discourse analysis and political perspectives, making it a timely dissection for students and researchers working in linguistics, political science and communication.

"This is a timely and significant collection that probes the most disturbing and dangerous political phenomenon of our civilisation. Anyone concerned about the resurgence of populism and nationalism will benefit from the insights of the contributors to this volume. Understanding what is going on is but a first step, but a crucial one."

About Edited by Encarnacion Hidalgo-Tenorio

Populism, a difficult concept to define

Populism is a strategy *

Populism is an ideology *

Populism is a discursive style *

Populism as a global phenomenon *

The aims and contents of this edited volume *

1 - The Politics of Authenticity in Populist Discourse

2 - The rising of populist parties in Italy. Techno-populism between neo-liberalism and direct democracy

3 - Rewriting the news: The Amphibian relationship between populist Podemos and print media in Spain

4 - Populism and the media factor: The Portuguese case in a European comparative perspective

5 - Populist discourse in the 21st century. The definition of otherness in Twitter in the cases of Spain, Bolivia and Venezuela

A CORPUS-BASED DISCOURSE ANALYSIS OF POPULISM *

6 - Us vs. Them: Polarisation and populist discourses in the online electoral campaign in Spain

7 - Imagining the people in UKIP and Labour

8 - 'For the many, not the few': A transitivity analysis of Labour's 2017 manifesto as a driving force for promoting a populist Britain

10 - Disability in the populist press: An investigation of British tabloids

11 - Speculations about the future: Populism and climate change in contemporary news discourse

13 - Populismus in National Socialism: Aesthetization and language in the Nazi rhetoric

14 - Donald Trump is a Conqueror: How cognitive analysis of Trump's discourse reveals his worldview

16 - New politics and the voice of the people. A study on populist language in Spanish political discourse

GOR010305690
Populist Discourse: Critical Approaches to Contemporary Politics by Edited by Encarnacion Hidalgo-Tenorio
Edited by Encarnacion Hidalgo-Tenorio
Used - Very Good
Paperback
Taylor & Francis Ltd
2019-03-25
316
1138541486
9781138541481
N/A
Book picture is for illustrative purposes only, actual binding, cover or edition may vary.
This is a used book - there is no escaping the fact it has been read by someone else and it will show signs of wear and previous use. Overall we expect it to be in very good condition, but if you are not entirely satisfied please get in touch with us.