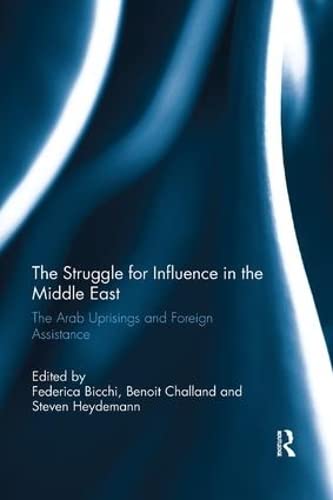 The Struggle for Influence in the Middle East
by Edited by Federica Bicchi (London School of Economics, UK)

The Struggle for Influence in the Middle East Summary

The Struggle for Influence in the Middle East: The Arab Uprisings and Foreign Assistance by Edited by Federica Bicchi (London School of Economics, UK)

This collection of research papers explores the impact of the Arab uprisings on the politics and political economy of foreign aid provision in the MENA region. Contributions focus on the foreign assistance policies and strategies of key donors (United States, Europe, Gulf countries and Turkey), and on the relationship between donors and recipients of foreign aid in a select set of MENA cases (Tunisia, Egypt, Palestine and to a lesser extent Morocco).

Despite widespread rhetoric among lead donors pledging to support the transformational potential of the Arab uprisings, the contributions find a more complex pattern in foreign aid provision since 2011. Among Arab donors, who have played a significant role as providers of aid to states most affected by mass protests, trends in foreign assistance reflect the competing priorities of donors, and their willingness to politicize aid provision in pursuit of their strategic interests. Among Western donors, authors find a high degree of continuity. Chapters that focus on Western donors seek to account for continuity on the part of Western governments and the EU at a moment of profound transformational potential. Two factors, bureaucratization and securitization, capture most of the explanations provided, which take into account a variety of local dimensions as well. Contributions also discuss the changing assistance environment, namely the globalization of foreign assistance, the complex bureaucratic arrangements presiding over the delivery of European and US aid, and the role of regional and international non-democracies in the provision of foreign assistance.

This book was published as a special issue of Mediterranean Politics.

About Edited by Federica Bicchi (London School of Economics, UK)

2. America's Response to the Arab Uprisings: US Foreign Assistance in an Era of Ambivalence Steven Heydemann

3. The Politics of Foreign Aid and the European Neighbourhood Policy Post-Arab Spring: `More for More' or Less of the Same? Federica Bicchi

4. Turkey as an `Emerging Donor' and the Arab Uprisings Meliha Benli Altunisik

7. International Assistance to Egypt after the 2011 and 2013 Uprisings: More Politics and Less Development Khaled Amin

8. Explaining the Patterns of the Gulf Monarchies' Assistance after the Arab Uprisings Sally Khalifa Isaac

9. Unwilling to Change, Determined to Fail: Donor Aid in Occupied Palestine in the aftermath of the Arab Uprisings Jeremy Wildeman and Alaa Tartir

GOR009972672
The Struggle for Influence in the Middle East: The Arab Uprisings and Foreign Assistance by Edited by Federica Bicchi (London School of Economics, UK)
Edited by Federica Bicchi (London School of Economics, UK)
Routledge Studies in Mediterranean Politics
Used - Very Good
Paperback
Taylor & Francis Ltd
2018-01-12
184
1138305464
9781138305465
N/A
Book picture is for illustrative purposes only, actual binding, cover or edition may vary.
This is a used book - there is no escaping the fact it has been read by someone else and it will show signs of wear and previous use. Overall we expect it to be in very good condition, but if you are not entirely satisfied please get in touch with us.