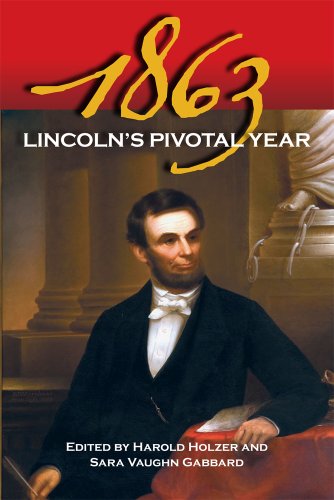 1863
by Edited by Harold Holzer

Only hours into the new year of 1863, Abraham Lincoln performed perhaps his most famous action as president by signing the Emancipation Proclamation. Rather than remaining the highlight of the coming months, however, this monumental act marked only the beginning of the most pivotal year of Lincoln's presidency and the most revolutionary twelve months of the entire Civil War. In recognition of the sesquicentennial of this tumultuous time, prominent Civil War scholars explore the events and personalities that dominated 1863 in this enlightening volume, providing a unique historical perspective on a critical period in American history. Several defining moments of Lincoln's presidency took place in 1863, including the most titanic battle ever to shake the American continent, which soon inspired the most famous presidential speech in American history. The ten essays in this book explore the year's important events and developments, including the response to the signing of the Emancipation Proclamation; the battles of Gettysburg and Vicksburg, and other less-well-known confrontations; the New York City draft riots; several constitutional issues involving the war powers of President Lincoln; and the Gettysburg Address and its continued impact on American thought. Other topics include the adaptation of photography for war coverage; the critical use of images; the military role of the navy; and Lincoln's family life during this fiery trial. With an informative introduction by noted Lincoln scholar Harold Holzer and a chronology that places the high-profile events of 1863 in context with cultural and domestic policy advances of the day, this remarkable compendium opens a window into a year that proved decisive not only for the Civil War and Lincoln's presidency but also for the entire course of American history.

"The volume includes appendices that offer an interesting essay contrasting the Emancipation Proclamation and the Gettysburg address and a timeline of the events of the year. Some minor issues aside, such as the absence of maps, all of the essays are thought provoking, and 1863: Lincoln's Pivotal Year is a worthwhile read for anyone seriously interested in the Civil War or Lincoln."--A. A. Nofi, The NYMAS Review

"1863: Lincoln's Pivotal Year brings together an outstanding collection of ten essays on a critical year in American history. The distinguished authors focus on well-known aspects of 1863, including the Emancipation Proclamation and party politics, as well as less familiar topics such as the importance of Civil War photography and the changing image of the president. In every case there are new things to say as the authors combine impressive analysis with clear readable prose. This is a volume that merits a place on the shelves of students of Lincoln, the Civil War, and by extension, American history."--Jean H. Baker, author of James Buchanan

"This volume combines the best of recent Lincoln scholarship in a unique and engaging format. It reveals new dimensions of Lincoln's presidency and personality and opens a window into a year that was decisive for the progress of the Civil War and American history in general."--Brian R. Dirck, author of Lincoln the Lawyer

About Edited by Harold Holzer

Harold Holzer is vice president for communications at the Metropolitan Museum of Art. He has coauthored several previous books with Mark E. Neely Jr., including The Confederate Image: Prints of the Lost Cause.

GOR009954048
1863: Lincoln's Pivotal Year by Edited by Harold Holzer
Edited by Harold Holzer
Used - Very Good
Hardback
Southern Illinois University Press
2013-04-15
224
0809332469
9780809332465
N/A
Book picture is for illustrative purposes only, actual binding, cover or edition may vary.
This is a used book - there is no escaping the fact it has been read by someone else and it will show signs of wear and previous use. Overall we expect it to be in very good condition, but if you are not entirely satisfied please get in touch with us.