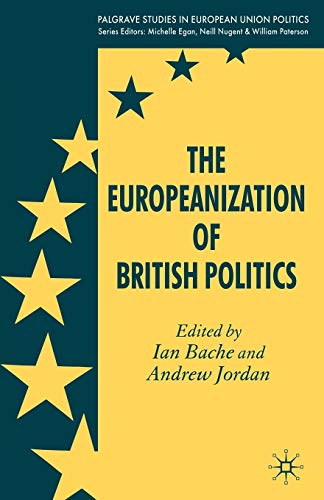 The Europeanization of British Politics
by Edited by Ian Bache

In Stock
£4.49
This is a unique book-length accounts of the domestic impact of EU membership. Drawing on expert contributions, this volume provides a state of the art account of how membership has affected the institutions of central, devolved and local governance, the activities of organized interests, and major areas of public policy.
Very Good
Only 2 left

The Europeanization of British Politics Summary

The Europeanization of British Politics by Edited by Ian Bache

This is a unique book-length accounts of the domestic impact of EU membership. Drawing on expert contributions, this volume provides a state of the art account of how membership has affected the institutions of central, devolved and local governance, the activities of organized interests, and major areas of public policy.

The Europeanization of British Politics Reviews

'Comprehensive, detailed and authoritative... the book will be of interest and use to both students and academics alike.' Political Studies Review

'The Europeanization of British Politics is the main contribution to the understanding of how EU has affected and still affects British politics. The common framework utilised by the contributors and the importance of the scholars involved make this book essential reading for those working on the relation between UK and the EU and, more in general, for scholars working on the process of Europeanization. Moreover, the clear writing style and the richness of information presented make this book interesting also for a non-academic reader.' Journal of Contemporary European Research

'A valuable addition to the literature, particularly via the template it develops for future single country studies. Essential for all Eurosceptics who believe the British have somehow 'lost' their identity and freedom for action on the world stage since 1973.' - Journal of European Integration

'An extensive introduction of the main research available on the Europeanization of British politics.' - Journal of Common Market Studies

'This is a refreshing book, covering an impressive range of actors and policy areas. It is based on new theoretical underpinnings and provides a careful assessment of the impact of European integration on British politics, policy and institutions. It will be a formidable tool for teaching and a significant input to scholarly research on Europeanization.' - Professor Claudio M. Radaelli, University of Exeter, UK.

'The question of how the processes of 'Europeanization' work has triggered a lively debate among those who study European integration. This volume is a valuable contribution to this debate. It has a sharply defined focus on the experiences of the United Kingdom over the years, across policy domains, and across levels and venues of governance and politics.' - Professor Helen Wallace, European University Institute, Florence, Italy.

'Britain is a European country but has often claimed to be insular and unique. This book explores the extent to which membership of the EU has made Britain more 'European', analysing the impact which the EU has had on British politics, policies and institutions. It is theoretically sophisticated and empirically rich and will be essential reading for students of British politics.' - Andrew Gamble, University of Sheffield, UK

About Edited by Ian Bache

GOR004797526
The Europeanization of British Politics by Edited by Ian Bache
Edited by Ian Bache
Palgrave Studies in European Union Politics
Used - Very Good
Paperback
Palgrave Macmillan
2006-08-03
311
0230204899
9780230204898
N/A
Book picture is for illustrative purposes only, actual binding, cover or edition may vary.
This is a used book - there is no escaping the fact it has been read by someone else and it will show signs of wear and previous use. Overall we expect it to be in very good condition, but if you are not entirely satisfied please get in touch with us.