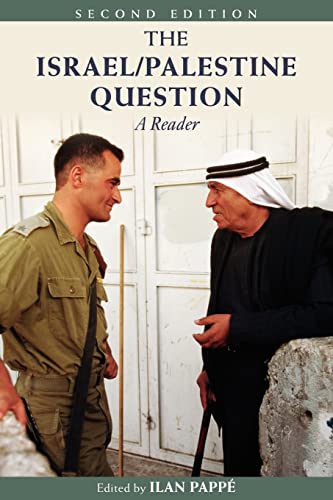 The Israel/Palestine Question
by Edited by Ilan Pappe

In Stock
£5.49
Showcases some of the areas of scholarly interest in the history of the Israeli-Palestinian conflict. This book emphasizes a number of developments in the conventional historiography.
Good
Only 1 left

The Israel/Palestine Question: A Reader by Edited by Ilan Pappe

In this second edition of The Israel/Palestine Question, Ilan Pappe showcases some of the most recent areas of scholarly interest in the history of the Israeli-Palestinian conflict. Including only works which challenge previous conceptions and paradigms, Ilan Pappe emphasizes a number of recent developments in the conventional historiography.

All the chapters in this edition are written by Israeli or Palestinian scholars, illustrating how much the desire to revisit the history of the conflict comes from historians belonging to the conflicting parties. The book also presents work influenced by wider historiographical developments, for instance the current interdisciplinary drive, as well as a sceptical view of elite historical narratives and the rise of non-elite history.

With a fully updated introduction, Ilan Pappe's timely anthology is a stimulating guide to the complex history and politics of the Middle East.

About Edited by Ilan Pappe

1. Introduction: New Historiographical Orientation in the Research on the Palestine Question Part 1: The History of Palestine Rediscovered 2. Rediscovering Ottoman Palestine: Writing Palestinians into History 3. The Rise of the Sanjak of Jerusalem in the Late Nineteenth Century Part 2: The Origins of Zionism in Palestine Reconsidered 4. The Colonization Perspective in Israeli Sociology 5. Zionism and Colonialism: A Comparative Approach Part 3: The New History of 1948 6. Revisiting the UNGA Partition Resolution 7. Historical Truth, Modern Historiography, and Ethical Obligations: The Challenge of the Tantura Case 8. The Debate about 1948 Part 4: Women's History 9. Minor Marriages and Khiyar Al-Bulugh in Ottoman Palestine: A Note on Women's Strategies in a Patriarchal Society 10. From Salons to the Popular Committees: Palestinian Women, 1919-89 Part 5: The Palestinians in Israel 11. Crime and Legal Control: The Israeli Arab Population during the Military Government Period (1948-66) 12. Palestinian in Israel Under the Israeli 'Ethnocratic' Regime 13. Present Absentees and Indigenous Resistance