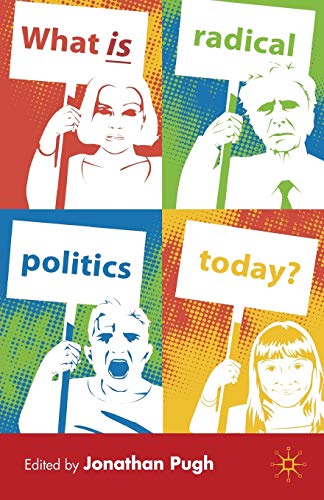 What is Radical Politics Today?
by Edited by J. Pugh

In Stock
£8.99
A crisis makes you rethink your life. The recent economic crisis is no exception. All of us are now thinking how the world could be run differently. Despite this, a radical alternative has hardly emerged to mobilize the masses. Written for the public and students, this book explores the character and spirit of radical politics in our times.
Very Good Good
Only 1 left

What is Radical Politics Today? Summary

What is Radical Politics Today? by Edited by J. Pugh

A crisis makes you rethink your life. The recent economic crisis is no exception. All of us are now thinking how the world could be run differently. Despite this, a radical alternative has hardly emerged to mobilize the masses. Written for the public and students, this book explores the character and spirit of radical politics in our times.

What is Radical Politics Today? Reviews

'Jonathan Pugh gathers some of the most innovative and insightful voices from Britain and beyond to stage a series of debates on the central issues facing radical politics today. This collection is a model for the kinds of discussion we need to move forward.' Michael Hardt, Duke University

'This is a bold, brave and timely book. As we emerge, blinking into the light after three decades of neo-liberal darkness, Jonathan Pugh has put together a collection of essays that will provoke and provide clues to the question of what comes next; what indeed is radical politics today?' - Neal Lawson, Chair of Compass

'With impeccable timing, this volume provides a stimulating range of perspectives on what radical politics can offer during this period of crisis and change. It deserves to be widely read and debated.' - Ruth Lister, Professor of Social Policy, Loughborough University, UK

'At a time when all ideologies are either exhausted or have become irrelevant, the need for a truly radical politics can hardly be exaggerated. Radical politics is about rethinking the common sense, the taken for granted assumptions, of the age. This timely and well-planned collection of essays by distinguished and concerned scholars throws much new light on where we should be looking for new ideas. It represents a major contribution to the ongoing debate on the problems of our times.' - Lord Bhikhu Parekh

'In the present moment of rapid and fundamental political and economic change we need sustained critical discussion of the kinds of alternative politics available to us. In What is Radical Politics Today? leading political theorists initiate this timely discussion by addressing both possibilities and obstacles from a wide range of perspectives.' - James Tully, University of Victoria

'There's a world to win, but only if the Left is possessed of bright ideas, inspiring aspirations and brilliant strategies. This book - rich in insight - assembles some of our leading thinkers to consider what sort of Left can unlock the progressive potential contained in this moment of early 21st century crisis. Has the mainstream Left conceded far too much to the liberals and conservatives this last 30 years? If so, what sort of Left can win hearts and minds in this moment of crisis? The answers to these important questions are the stuff of this excellent book.' - Noel Castree, Manchester University

'This is a wonderfully salutary and visionary collection of widely different opinions on how we can think about our world in these 'interesting' times.' - Emily Young, Sculptor, and of Penguin Cafe Orchestra

'Like an exploding star, the radical Left in the UK has disintegrated and its fragments have flown off in all directions. People who once thought they were engaged in a common project can no longer agree about where they are going, yet alone how they should get there. If you feel radical but confused read these essays. They may make you even more confused, but they may also help you decide where to go next' - Bob Rowthorn, Cambridge University

'If you are looking for a rich diversity of views and fierce arguments about radical politics today, then this is the book for you!' -Achin Vanaik, Delhi Univeristy

'With the aim of understanding the forces and boundaries of a genuinely radical politics, this volume begins to interrogate the models, figures and reach of the structureless moment that currently commands political tropology and life.' - Avital Ronell, New York University

...the strength of the book as a whole lies precisely in bringing different political traditions into productive dialogue.' www.redpepper.org.uk

'A fascinating and pithy tome' - The Catholic Herald

About Edited by J. Pugh

JONATHAN PUGH is Senior Academic Fellow in Territorial Governance at Newcastle University, UK. He is Director of 'The Spaces of Democracy and the Democracy of Space' network. This examines the character and spirit of radical politics today, operating through 15 institutions globally.

GOR002789570
What is Radical Politics Today? by Edited by J. Pugh
Edited by J. Pugh
Used - Very Good
Paperback
Palgrave Macmillan
2009-10-20
285
023023626X
9780230236264
N/A
Book picture is for illustrative purposes only, actual binding, cover or edition may vary.
This is a used book - there is no escaping the fact it has been read by someone else and it will show signs of wear and previous use. Overall we expect it to be in very good condition, but if you are not entirely satisfied please get in touch with us.