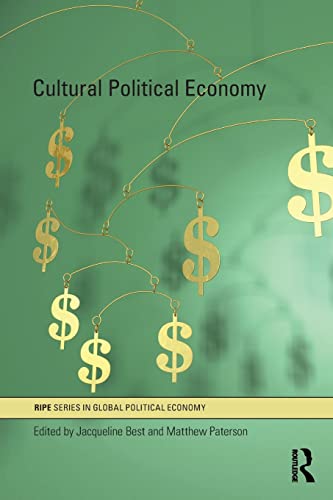 The global political economy is inescapably cultural. Whether we talk about the economic dimensions of the "war on terror", the sub-prime crisis and its aftermath, or the ways in which new information technology has altered practices of production and consumption, it has become increasingly clear that these processes cannot be fully captured by the hyper-rational analysis of economists or the slogans of class conflict. This book argues that culture is a concept that can be used to develop more subtle and fruitful analyses of the dynamics and problems of the global political economy.

Rediscovering the unacknowledged role of culture in the writings of classical political economists, the contributors to this volume reveal its central place in the historical evolution of post-war capitalism, exploring its continued role in contemporary economic processes that range from the commercialization of security practices to the development of ethical tourism. The book shows that culture plays a role in both constituting different forms of economic life and in shaping the diverse ways that capitalism has developed historically - from its earliest moments to its most recent challenges.

Providing valuable insights to a wide range of disciplines, this volume will be of vital interest to students and scholars of International Political Economy, Cultural and Economic Geography and Sociology, and International Relations.

'Chapter by chapter, this trans-disciplinary anthology offers the very best contemporary analyses of the cultural-political economy interface available. It is an important intervention that should serve pedagogy in a wide variety of disciplines while disrupting the tendencies that have separated cultural and economic research agendas.' - Michael Shapiro, University of Hawaii at Manoa, USA

'The contributors to this excellent collection seek not to bury political-economy yet neither do they wish to praise it uncritically. Adding to and engaging with the various theoretical strands that make up the broad church of cultural economy, the volume's aim is to show why injecting the `cultural dimension' into analyses enriches rather than detracts from our understanding of how the political and the economic work separately and together, and what's at stake if `culture' is jettisoned at the outset. Containing theoretically informed engagements with practices as varied as ethical tourism, to the war on terror, to the rise of the `talent world'...through to a provocative and concluding engagement with the whole project of `cultural political economy' offered by Rob Walker, this volume is an important contribution to the task of making sense of the cultural dynamics that give motion to contemporary capitalisms.' - Michael Pryke, Faculty of Social Sciences, The Open University

'This book boldly opens up an intriguing and important field of inquiry that explores the intersections, boundaries, and inseparable qualities of culture, politics and the economy. It acknowledges, criticizes and reinterprets past efforts to conceptualize the relationships between these three categories but it is also filled with exciting new theoretical insights and novel analyses of particular historical and contemporary transnational practices. The chapters are consistently high quality, wide ranging in their themes, while working together to illuminate the value of cultural political economy as a field of inquiry. After reading this book some of the most familiar concepts and assumptions that we use in thinking about culture, politics and the economy do not look the same anymore.' - Tony Porter, McMaster University, Canada

About Edited by Jacqueline Best (University of Ottawa, Canada)

GOR010299484
Cultural Political Economy by Edited by Jacqueline Best (University of Ottawa, Canada)
Edited by Jacqueline Best (University of Ottawa, Canada)
RIPE Series in Global Political Economy
Used - Like New
Paperback
Taylor & Francis Ltd
2009-12-14
264
0415489326
9780415489324
N/A
Book picture is for illustrative purposes only, actual binding, cover or edition may vary.
The book has been read, but looks new. The book cover has no visible wear, and the dust jacket is included if applicable. No missing or damaged pages, no tears, possible very minimal creasing, no underlining or highlighting of text, and no writing in the margins.