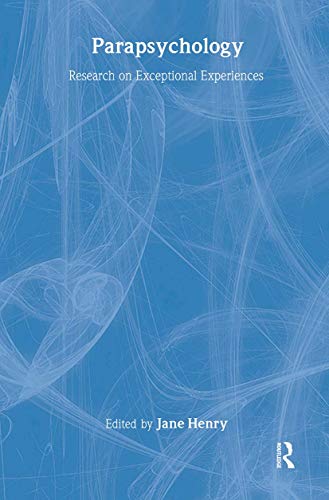 Parapsychology
by Edited by Jane Henry

In Stock
£64.99
Beginning with an introduction to the methodology, Parapsychology provides the reader with a sympathetic yet critical overview of current research into unexplained phenomena including visions, telepathy, psychokinesis, and out-of-body experiences
Good
Only 1 left

Parapsychology: Research on Exceptional Experiences by Edited by Jane Henry

Psychic and other exceptional experiences are surprisingly common but opinions as to their causes vary widely. Can tricks of the mind such as hallucinations, mistaken perception and errors of judgement explain such phenomena or does some yet to be understood non-sensory means of communication come into play?

In Parapsychology, leading researchers from both the UK and the USA combine their expertise to form a lucid account of research into the science of psychic experience. Beginning with an introduction to the methodology, Parapsychology addresses topics including coincidence, telepathy, precognition, psychokinesis, healing, apparitions, reincarnation and out-of-body experiences. Each chapter describes the phenomenon, outlines the main lines of research and discusses the merits of possible explanations for such anomalies of cognitive function. Extensive suggestions for relevant further reading on each individual subject are provided, along with a detailed glossary of terms.

Parapsychology provides an accessible and succinct overview of the research and current thinking on the subject of psychic and allied experiences. This balanced account of work in this fascinating area will be of great interest to students and researchers in psychology as well as anyone with an interest in the field.

About Edited by Jane Henry

Jane Henry is a psychologist and senior lecturer at the Open University where she chairs the Experiential Research Group. She was founding Chair of the British Psychological Society's Consciousness and Experiential Psychology Section.

GOR009973590
Parapsychology: Research on Exceptional Experiences by Edited by Jane Henry
Edited by Jane Henry
Used - Good
Hardback
Taylor & Francis Ltd
2004-12-02
208
0415213592
9780415213592
N/A
Book picture is for illustrative purposes only, actual binding, cover or edition may vary.
This is a used book - there is no escaping the fact it has been read by someone else and it will show signs of wear and previous use. Overall we expect it to be in very good condition, but if you are not entirely satisfied please get in touch with us.