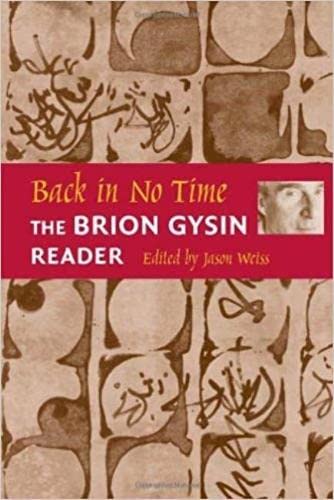 Back in No Time
by Edited by Jason Weiss

In Stock
£16.99
First anthology of writings of a brilliant avant-garde figure
Very Good
Only 2 left

Back in No Time Summary

Back in No Time by Edited by Jason Weiss

Brion Gysin (1916-1986) was a visual artist, historian, novelist, and an experimental poet credited with the discovery of the 'cut-up' technique -- a collage of texts, not pictures -- which his longtime collaborator William S. Burroughs put to more extensive use. He is also considered one of the early innovators of sound poetry, which he defines as 'getting poetry back off the page and into performance.' Back in No Time gathers materials from the entire Gysin oeuvre: scholarly historical study, baroque fiction, permutated and cut-up poetry, unsettling memoir, selections from The Process and The Last Museum, and his unproduced screenplay of Burroughs' novel Naked Lunch. In addition, the Reader contains complete texts of several Gysin pieces that are difficult to find, including "Poem of Poems," "The Pipes of Pan," and "A Quick Trip to Alamut."

Back in No Time Reviews

"This is a valuable book that makes accessible an artist too long considered a cult-eccentric, arguing for an engagement with life in which one grasps constantly for the spiritual in art in a time when frontiers -; in time, space, and formal experiment -; lured with their promise of adventure . . . This release fills a crucial gap in the historical record."--Publishers Weekly

"When all the secret histories of the last century are finally told, Brion Gysin's pivotal role as cultural border-crosser, psychic adventurer and aesthetic provocateur will have to be acknowledged, but Jason Weiss's Back in No Time provides all the evidence anyone should need right now. Back in No Time makes the best case I have ever seen for Gysin's importance as a writer and theorist continually perched on the razor's edge of innovation."--Timothy S. Murphy, author of Wising up the Marks: The Amodern William Burroughs

About Edited by Jason Weiss

One of the first Fulbright Fellows, BRION GYSIN was recognized for his book, To Master -; a Long Goodnight, with its substantial appendix, A History of Slavery in Canada. His career as a visual artist began before the age of 20; he was part of the famous 1935 Surrealist Drawings show in Paris, though at the orders of Andre Breton his work was taken down. His paintings are owned by MOMA, the Boston Museum of Fine Arts and Paris's Pompidou Center. Jason Weiss is a New York-based writer and author of Writing at Risk: Interviews in Paris with Uncommon Writers (1991).

GOR010200987
Back in No Time by Edited by Jason Weiss
Edited by Jason Weiss
Used - Very Good
Paperback
University Press of New England
2002-01-15
400
0819565296
9780819565297
N/A
Book picture is for illustrative purposes only, actual binding, cover or edition may vary.
This is a used book - there is no escaping the fact it has been read by someone else and it will show signs of wear and previous use. Overall we expect it to be in very good condition, but if you are not entirely satisfied please get in touch with us.