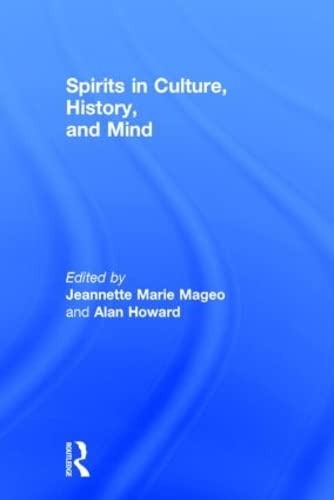 Spirits in Culture, History and Mind
by Edited by Jeannette Mageo

In Stock
£20.99
This study reintegrates spirits into comparative theories of religion, which have tended to focus on institutionalized forms of belief associated with gods. It brings an historical perspective to culturally patterned experiences with spirits, drawing on nine case studies from Pacific societies.
Good
Only 1 left

Spirits in Culture, History and Mind by Edited by Jeannette Mageo

Spirits in Culture, History and Mind reintegrates spirits into comparative theories of religion, which have tended to focus on institutionalized forms of belief associated with gods. It brings an historical perspective to culturally patterned experiences with spirits, and examines spirits as a locus of tension between traditional and foreign values. Taking as a point of departure shifting local views of self, nine case studies drawn from Pacific societies analyze religious phenomena at the intersection of social, psychological and historical processes. The varied approaches taken in these case studies provide a richness of perspective, with each lens illuminating different aspects of spirit-related experience. All, however, bring a sense of historical process to bear on psychological and symbolic approaches to religion, shedding new light on the ways spirits relate to other cultural phenomena.

"The essays . . . contribute importantly to our understanding of beliefs and behavior regarding the supernatural in several Pacific societies."
-"American Anthropologist
"The rich chapters in this collection offer the reader much to ponder. The editors are to be recommended.... I would give this book my highest recommendation. John Barker, "University of British Columbia."
"This book examines spirits--ideas about them, encounters with them--as the historical locus of tensions between zones of control and fluidity in social experience. Taking shifting senses of the self and the world it inhabits as their point of departure, the contributors are committed to an analysis of culture at the intersection between psychological, social, and historical processes. By refusing the conventional estrangement between the symbolic and the historical, the authors have established a new benchmark for future work."
-Dan Jorgensen, Department of Anthropology, University ofWestern Ontario
"I will say that the lead article, "Gods, Spirits and History: A Theoretical Perspective," by Robert I. Levy, Mageo, and Howard, should be required reading for anyone undertaking work on possession...In summary, this volume is an important addition to the field of possession studies.."
-Religious Studies Review, Volume 27 Number 3, July 2001
""Spirits in Culture, History, and Mind consists of a series of contribtuions representing different perspectives necessary to a cross-cultural understanding of contemporary religion. The question the volume raises is not the validity of the exercise but whether the goal is fulfilled by an ethnographic treatment of spirits derived primarily from case studies ofthe Pacific basin, particularly since spirits in this region are said to have retreated "to the shadows..""
-Religious Studies Review, Volume 27 Number 3, July 2001

About Edited by Jeannette Mageo

Jeannette Mageo is Assistant Professor at Washington State University. Alan Howard is Professor of Anthropology at the University of Hawaii.

GOR010204111
Spirits in Culture, History and Mind by Edited by Jeannette Mageo
Edited by Jeannette Mageo
Used - Good
Hardback
Taylor & Francis Ltd
1996-03-12
282
0415913675
9780415913676
N/A
Book picture is for illustrative purposes only, actual binding, cover or edition may vary.
The book has been read but remains in clean condition. All pages are intact and the cover is intact. Some minor wear to the spine.