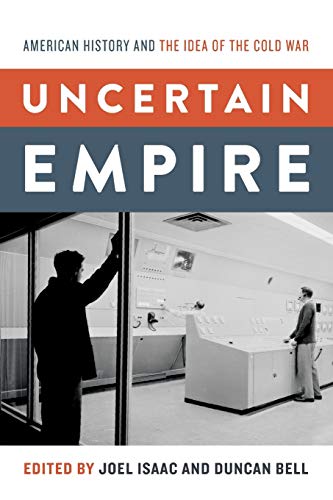 In Stock
£25.99
Uncertain Empire examines the idea of the Cold War and its application to the writing of American history.
Very Good
Only 1 left

Historians have long understood that the notion of "the cold war" is richly metaphorical, if not paradoxical. The conflict between the United States and the Soviet Union was a war that fell ambiguously short of war, an armed truce that produced considerable bloodshed. Yet scholars in the rapidly expanding field of Cold War studies have seldom paused to consider the conceptual and chronological foundations of the idea of the Cold War itself. This stands in contrast to the study of other historical epochs that are governed by grand but ambivalent rubrics: the Renaissance, the Scientific Revolution, or the Industrial Revolution. In Uncertain Empire, a group of leading scholars takes up the challenge of making sense of the idea of the Cold War and its application to the writing of American history. They interrogate the concept from a wide range of disciplinary vantage points; the scope of these different positions illustrates the diversity of methods and approaches in contemporary Cold War studies. Among the disciplines on which the book draws are diplomatic history, the history of science, literary criticism, cultural history, and the history of religion. Animating the volume as a whole is a question about the extent to which the Cold War was an American invention. Essays look at the Cold War as in need of a rigorous re-centering, after a decade in which historians have introduced expansive global and transnational perspectives on the conflict; as a uniquely American ideological project designed to legitimize the pursuit of an ambitious geopolitical agenda; as a geopolitical and transnational phenomenon; and other approaches. Uncertain Empire brings these debates into focus, and offers students of the Cold War a new framework for considering recent developments in the scholarship.

A model for an edited volume. Joel Isaac and Duncan Bell, the volume's editors, aim not to criticize existing Cold War scholarship, but rather to open new avenues of inquiry and perhaps reinvigorate what is already a very large and rich field. That is because, while there is no shortage of writing on the topic, there is a surprising lack of attention to its meaning. * Gretchen Heefner, Reviews in American History *
Uncertain Empire is that rarity: a collection of essays that works as seamlessly and to as great effect as a single-authored work. From its comprehensive introduction through the incisive analyses by some of the most interesting historians of the Cold War, Isaac and Bell have assembled a rich and multi-faceted exploration of their subject. In their hands, the Cold War becomes a lens through which to examine American history itself. * Marilyn Young, New York University *
These are stimulating think pieces from a multidisciplinary perspective. * CHOICE *
Thought-provoking. An impressively wide-ranging and exceptionally coherent collection that simultaneously clarifies, problematizes, and advances our understanding of the United States and the Cold War. * Hugh Wilford, Journal of American History *