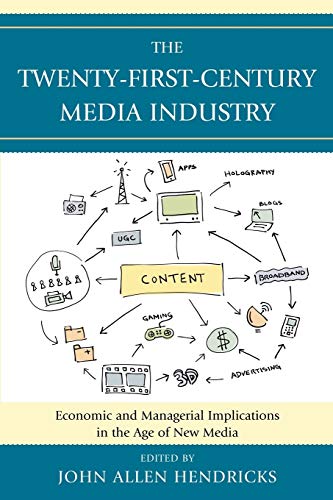 In Stock
£27.99
The Twenty-First-Century Media Industry examines the role that new media technologies are having on the traditional media industry from a media management perspective. It provides an intriguing examination of how traditional media industries are adapting to new media technologies and evolving in the twenty-first century.
Very Good
Only 1 left

The Twenty-First-Century Media Industry: Economic and Managerial Implications in the Age of New Media by Edited by John Allen Hendricks

The 21st Century Media Industry is well worth reading not only for its broad scope, but for the timeliness of the chapters. Readers of this book will come away with a clear conceptual map of the changing media landscape as well as a detailed understanding of the challenges of the years ahead in forging a new business model, or set of business models, for media operating in the digital age. -- John V. Pavlik, Rutgers University
Predicting the future of the media industry at this juncture may sound audacious, yet this volume does so, and the future it presents is auspicious. The 13 chapters-all by US academicians and media scholars with impressive credentials-address possible approaches to media management, new technologies and innovations, and the implications of various media: recorded music, print, journalism, cable and broadcasting (including radio), cinema, the Internet, mobile telephones. Media have saturated modern society for the past 50 years. The opening essay, coauthored by Hendricks (Stephen F. Austin State Univ.) and Susan Smith, notes that 'the latter half of the twentieth century saw an explosion in the communication industry [with] personal computers, satellites, cable television, cell phones, digital and high definition television, DVDs and the World Wide Web.' But, the essay goes on to observe, the change is not in the media per se but rather in the 'delivery systems.' That the book does not offer an exact definition of the term 'new media' is only right, given that in the 1450s the printing press was a 'new medium.' Summing Up: Highly recommended. Upper-division undergraduates through faculty. * CHOICE *

Dedication List of Tables List of Figures Foreword Acknowledgments: Change: Technology, Economic Implications, and Consumer Behaviors 1: New Media: New Technology, New Ideas or New Headaches 2: Media Management: The Changing Media Industry and Adaptability 3: DVRs and the Empowered Audience: A Transformative New Media Technology Takes Off 4: The Obstinate Audience Revisited: The Decline of Network Advertising 5: Going Viral: Mass Media Meets Innovation 6: The First Domino: The Recorded Music Industry and New Technology 7: Changes and Challenges in the Print Industry: The New Landscape of the Print Media 8: Challenges and Opportunities, New Models and the Emergence of the Next Newsroom 9: Broadcast and Cable on the Third Screen: Moving Television Content to Mobile Devices 10: How to Reach the Masses: Broadcasters' Uses of the Internet and Cell Phones 11: Making Money with Mobile 12: Cinema in the Age of RWX Culture 13: Local Market Radio: Programming and Operations in a New Media World About the Editor About the Contributors Bibliography Index

GOR009966193
The Twenty-First-Century Media Industry: Economic and Managerial Implications in the Age of New Media by Edited by John Allen Hendricks
Edited by John Allen Hendricks
Studies in New Media
Used - Very Good
Paperback
Lexington Books
2011-07-15
312
0739140043
9780739140048
N/A
Book picture is for illustrative purposes only, actual binding, cover or edition may vary.
This is a used book - there is no escaping the fact it has been read by someone else and it will show signs of wear and previous use. Overall we expect it to be in very good condition, but if you are not entirely satisfied please get in touch with us.