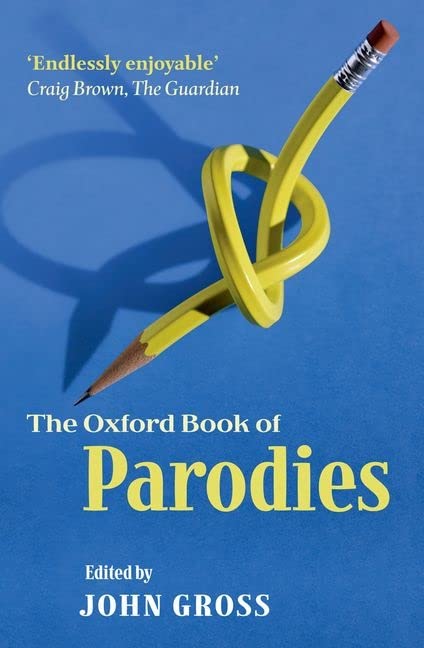 The Oxford Book of Parodies
by Edited by John Gross (Freelance author, anthologist, and book reviewer)

In Stock
£4.49
An unparalleled introduction to the parodist's art, The Oxford Book of Parodies includes parodies from Chaucer to the present day, ranging from imitations and spoofs to lampoons and pastiches, comical, scornful, witty, and subtle. It also takes in advertisements, legal rituals, political warfare and a scientific hoax.
Very Good
Only 2 left

The Oxford Book of Parodies Summary

The Oxford Book of Parodies by Edited by John Gross (Freelance author, anthologist, and book reviewer)

Parodies come in all shapes and sizes. There are broad parodies and subtle parodies, ingenious imitations and knockabout spoofs, scornful lampoons and affectionate pastiches. All these varieties, and many others, are represented in this stunning new anthology, which provides an unparalleled introduction to the parodist's art. The classics of the genre are all here, from Lewis Carroll to Max Beerbohm; but so are scores of lesser known but scarcely less gifted figures, and brilliant contemporaries such as Craig Brown and Wendy Cope. At every stage there are surprises. Chaucer celebrates Miss Joan Hunter Dunn, Proust visits Chelsea, Yeats re-writes 'Old King Cole', Harry Potter encounters Mick Jagger, a modernized Sermon on the Mount rubs shoulders with an obituary of Sherlock Holmes. The collection provides a hilarious running commentary on literary history, but it also looks beyond literature in the narrow sense to take in such things as advertisements, legal rituals, political warfare, and a scientific hoax.

The Oxford Book of Parodies Reviews

The critic FR Leavis disliked parody on the grounds that it "demeaned" the writer being held up to ridicule. A moment of two in the company of John Gross's sparkling new compendium demonstrates how wrong Leavis was. Gross's book passes the first great anthologist's test - putting in everything the reader expects to find, and a whole lot more besides - with flying colours. * DJ Taylor, The Financial Times *
Endlessly enjoyable * Craig Brown, The Guardian *
Sumptuous collection. * The Oldie *
There are endless amusing trifles. * The Week *
Mr Gross's legendary gifts as an editor and critic are much in evidence. * Eric Ormsby, Wall Street Journal *
Substantial and richly entertaining anthology...Gross provides a brief but admirably informative history of the form. * The Sunday Telegraph *
John Gross is an excellent and unintrusive host...he has produced here a fine, diverting book * Seamus Perry, TLS *
Sparkling new compendium. * DJ Taylor, Financial Times *
His entries have enough comic vigour or elegance to be amusing even when one does not know the author being spoofed, and hilarious when one does. * Kevin Jackson, Sunday Times *
John Gross's new anthology of parodies in English (with a few foreign titbits) has samples both high and low of this diverse genre. * The Economist *
The best pastiches, burlesques and spoofs have a magical wit that transcends mere mimicry, as this wide-ranging anthology shows. * Kevin Jackson, The Sunday Times *
Gross has very sensibly put together an anthology that aims to give pleasure on at least two levels. * Kevin Jackson, The Sunday Times *
It is impossible to read it without smiling, smirking or laughing out loud. * Mark Sanderson, Evening Standard *
Superb anthology of parodies...This is an anthology with something for everyone. * Simon Griffith, Mail on Sunday *
John Gross has compiled a historical anthology that is something to treasure. * John Sutherland, Literary Review *
This collection of parodies does not disappoint...It's a deliciously funny book. * Bevis Hillier, Spectator *
Excellent introduction to this superb smorgasbord of mimicry and literary mutilation. * Jonathan Wright, Catholic Herald *
His new and welcome anthology is well stocked with witty and diverting specimens. * J. M. W. Thompson, Standpoint *

John Gross was a freelance author, anthologist, and book reviewer.