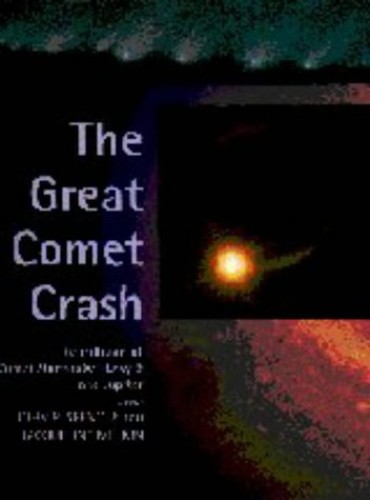 In Stock
£3.99
The drama of the crash of comet Shoemaker-Levy 9 with Jupiter is captured in words and photographs from the scientists who witnessed this unique event. With interpretations from top researchers and the best photographs from observatories around the world, this is a complete record of the greatest crash ever seen in the Solar System. See Worldwide Web http://www.cup.cam.ac.uk/Comet/Comettop.html
Very Good
Only 3 left

The Great Comet Crash: The Collision of Comet Shoemaker-Levy 9 and Jupiter by Edited by John R. Spencer (Lowell Observatory, Arizona)

The Great Comet Crash is a record of the spectacular collision between Comet Shoemaker-Levy 9 and the giant planet Jupiter in July 1994. Researchers who were involved in all aspects of observing and interpreting the encounter give personal narratives of the events, from the discovery of the comet through to the dramatic effects on the appearance of Jupiter in the hours, days and months after the collision. The chapters are all by distinguished researchers who personally participated in the international teams who recorded the events. The book is illustrated in colour throughout by the very best images selected from professional observatories around the world. The Great Comet Crash is the definitive illustrated account by professional astronomers of the collision and its consequences.

'Where the book really shines is in the illustrations, providing a photo album of the newly discovered comet, its evolution as it headed for its catastrophic end, the Galileo and Hubble Space Telescope observations, and the wealth of ground-based infrared and visual imagery ... highly recommended.' Paul Weismann, Science
'The great value of this book is that so much is written by the main players themselves ... One puts the book aside with a profound sense of excellence achieved ... a great book suitable for a wide range of readers, and great value too.' Astronomy and Space
' ... a great deal of riveting information ... a model of good popular science exposition.' Science Reporter, Journal of the Association of British Science Writers ' ... superbly illustrated ... full of information.' W. M. Napier, Endeavour
'... a worthy record of a very momentous event.' Journal of the British Astronomical Association ' ... well produced, with excellent illustrations, easy to read ... Overall a splendid book.' Popular Astronomy

GOR002649672
The Great Comet Crash: The Collision of Comet Shoemaker-Levy 9 and Jupiter by Edited by John R. Spencer (Lowell Observatory, Arizona)
Edited by John R. Spencer (Lowell Observatory, Arizona)
Used - Very Good
Hardback
Cambridge University Press
1995-09-29
128
0521482747
9780521482745
N/A
Book picture is for illustrative purposes only, actual binding, cover or edition may vary.
This is a used book - there is no escaping the fact it has been read by someone else and it will show signs of wear and previous use. Overall we expect it to be in very good condition, but if you are not entirely satisfied please get in touch with us.