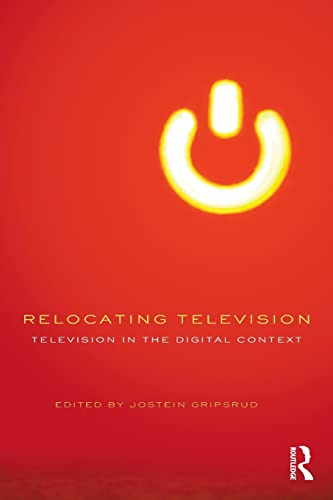 In Stock
£27.99
Describes, analyses and interprets a complex process of change, delivering a critical account of the digitisation process as a multifaceted whole.
Very Good Good
Only 1 left

Relocating Television: Television in the Digital Context by Edited by Jostein Gripsrud

For over half a century, television has been the most central medium in Western democracies - the political, social and cultural centrepiece of the public sphere. Television has therefore rarely been studied in isolation from its socio-cultural and political context; there is always something important at stake when the forms and functions of television are on the agenda. The digitisation of television concerns the production, contents, distribution and reception of the medium, but also its position in the overall, largely digitised media system and public sphere where the internet plays a decisive role.

The articles in this comprehensive collection are written by some of the world's most prominent scholars in the field of media, communication and cultural studies, including critical film and television studies.

Relocating Television offers readers an insight into studying television alongside the internet, participatory media and other technocultural phenomena such as DVDs, user-generated content and everyday digital media production. It also focuses on more specific programmes and phenomena, including The Wire, MSN, amateur footage in TV news, Bollywoodization of TV news, YouTube, fan sites tied to e.g. Grey's Anatomy and X Factor. Relocating Television will be highly beneficial to both students and academics across a wide range of undergraduate and postgraduate courses including media, communication and cultural studies, and television and film studies.

About Edited by Jostein Gripsrud

Jostein Gripsrud is Professor in the Department of Information Science and Media Studies at the University of Bergen, Norway, and leader of the DigiCult research group. He has published extensively in several languages on theatre, popular literature, film history, television, journalism, popular music, media and cultural policy and relevant social and cultural theory for all of these media, genres and cultural forms. Previous publications include Understanding Media Culture (2002) and Media, Markets and Public Spheres (co-editor and contributor, 2010).

GOR009951650
Relocating Television: Television in the Digital Context by Edited by Jostein Gripsrud
Edited by Jostein Gripsrud
Comedia
Used - Very Good
Paperback
Taylor & Francis Ltd
2010-06-17
304
0415564530
9780415564533
N/A
Book picture is for illustrative purposes only, actual binding, cover or edition may vary.
This is a used book - there is no escaping the fact it has been read by someone else and it will show signs of wear and previous use. Overall we expect it to be in very good condition, but if you are not entirely satisfied please get in touch with us.