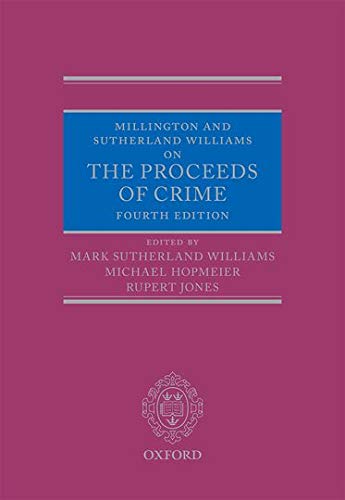 In Stock
£10.99
Millington and Sutherland Williams on The Proceeds of Crime provides a definitive guide to the law concerning the recovery of the proceeds of crime in England and Wales.
Very Good
Only 1 left

Millington and Sutherland Williams on The Proceeds of Crime Summary

Millington and Sutherland Williams on The Proceeds of Crime provides a definitive guide to all aspects of the law concerning the recovery of the proceeds of crime in England and Wales. It provides an easily navigable step-by-step approach that considers how the legislation is geared to ensuring that criminals do not benefit from their crimes financially, as well as detailed coverage of every stage of the confiscation process. This new edition has been fully updated to include all important legislative changes over the last three years, and covers all significant case law, including discussion on R v Waya The new edition incorporates in-depth coverage of the relevant legislation, with analysis of the Proceeds of Crime Act 2002 and reference to case law under both the Drug Trafficking Act 1994 and the Criminal Justice Act 1988, as well as the most recent amendments under the Crime and Courts Act 2013. The new edition contains carefully selected appendices, including extracts from the Proceeds of Crime Act 2002, and draft restraint, receivership and civil recovery orders.

Millington and Sutherland Williams on The Proceeds of Crime Reviews

Review from previous edition ...by far the best book on the subject * Henry Milner, Solicitor and Partner, Henry Milner & Co *
...an essential and invaluable text... * Criminal Bar Association News *
not only an invaluable introduction to the area, but also a continued source of practical assistance * New Law Journal *
...simply indispensable to anyone concerned with the criminal law * Justice of the Peace *
absolute gem of a book for those whose practice involves the Proceeds of Crime Act 2002 in any way, written by authors with extensive experience in the field. * The Law Society, Gatekeeper Newsletter *
a welcome balance between...the need to provide step-by-step practical guidance to practitioners and their desire to explain and comment on the context of, and the impetus for, legislative change. * Robert Amaee, Law Society Gazette *
A great legal 'help mate' to judge and lawyer alike. * Phillip Taylor MBE and Elizabeth Taylor, Richmond Green Chambers *

Mark Sutherland Williams is a Judge of the First-Tier Tribunal based at Southampton. He was previously a barrister at 3PB, where he appeared as counsel in a number of the most significant cases decided in the proceeds of crime field, and was head of the Asset Forfeiture Group for 10 years. HHJ Michael Hopmeier is a Circuit Judge based at Kingston Crown Court. He was previously a barrister at Hardwicke Chambers and 23 Essex Street and, during a 30 year career at the Bar, undertook many high-profile fraud cases, both prosecuting and defending. Rupert Jones is a barrister at The Chambers of Ian Lawrie QC, 3 Paper Buildings. He was called to the Bar in 2000 and specialises in the field of asset forfeiture and proceeds of crime.

GOR010300946
Millington and Sutherland Williams on The Proceeds of Crime by Edited by Judge Mark Sutherland Williams
Edited by Judge Mark Sutherland Williams
Used - Very Good
Hardback
Oxford University Press
2013-09-26
820
0199672911
9780199672912
N/A
Book picture is for illustrative purposes only, actual binding, cover or edition may vary.
This is a used book - there is no escaping the fact it has been read by someone else and it will show signs of wear and previous use. Overall we expect it to be in very good condition, but if you are not entirely satisfied please get in touch with us.