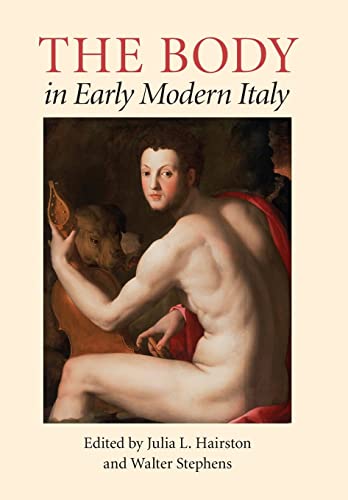 The Body in Early Modern Italy
by Edited by Julia L. Hairston

The Body in Early Modern Italy by Edited by Julia L. Hairston

A highly insightful look into history and art, a top pick for such collections for both community and college libraries. * Midwest Book Review *
A collection for those interested in Italian and comparative literature, early modern studies, cultural history, or gender studies. * Choice *
The broad scope of the essays and the questions they raise will be of compelling importance to any reader interested in the Renaissance, not only the Italian Renaissance, and to scholars across the disciplines from literature, performance, art history, and philosophy to sexuality, gender studies, and science. -- Bella Mirabella * Clio *
The book goes beyond the studies that are conventionally understood as the sphere of "the body" to include deportment in public and private, gymnastics, warfare, dueling and hunting. -- Christine Meek * Sixteenth Century Journal *
This fine work stands as evidence of the benefits of interdisciplinarity. -- Holly S. Hurlburt * Early Modern Women: An Interdisciplinary Journal *
A welcome addition to the literature on gender and sexuality. The majority of its essays employ innovative methodologies that yield fresh insights into the norms and transgressions of the early modern body... The book will be valuable to a range of scholars and students, and is an important contribution to the study of early modern notions of the body. -- Joyce de Vries * European History Quarterly *
The interdisciplinary approach of The Body in Early Modern Italy is a great success. -- Cynthia Nazarian * Renaissance Quarterly *

About Edited by Julia L. Hairston

Julia L. Hairston is the associate academic director of the University of California, Rome Study Center, where she teaches courses in Italian literature. She has published articles in Renaissance Quarterly, Exemplaria, and MLN and is coeditor of Gendered Contexts: New Perspectives in Italian Cultural Studies. Walter Stephens is the Charles S. Singleton Professor of Italian Studies at the Johns Hopkins University and author of Demon Lovers: Witchcraft, Sex, and the Crisis of Belief and Giants in Those Days: Folklore, Ancient History, and Nationalism.

GOR010305684
The Body in Early Modern Italy by Edited by Julia L. Hairston
Edited by Julia L. Hairston
Used - Very Good
Hardback
Johns Hopkins University Press
2010-04-01
448
080189414X
9780801894145
N/A
Book picture is for illustrative purposes only, actual binding, cover or edition may vary.
This is a used book - there is no escaping the fact it has been read by someone else and it will show signs of wear and previous use. Overall we expect it to be in very good condition, but if you are not entirely satisfied please get in touch with us.