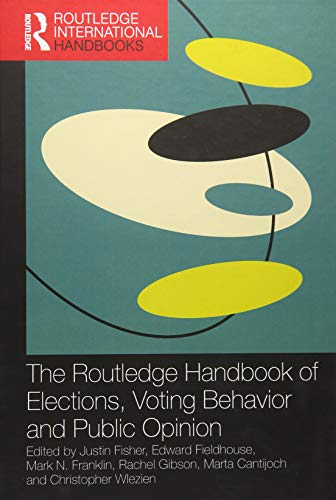 The study of elections, voting behavior and public opinion are arguably among the most prominent and intensively researched sub-fields within Political Science. It is an evolving sub-field, both in terms of theoretical focus and in particular, technical developments and has made a considerable impact on popular understanding of the core components of liberal democracies in terms of electoral systems and outcomes, changes in public opinion and the aggregation of interests.

This handbook details the key developments and state of the art research across elections, voting behavior and the public opinion by providing both an advanced overview of each core area and engaging in debate about the relative merits of differing approaches in a comprehensive and accessible way. Bringing geographical scope and depth, with comparative chapters that draw on material from across the globe, it will be a key reference point both for advanced level students and researchers developing knowledge and producing new material in these sub-fields and beyond.

The Routledge Handbook of Elections, Voting Behavior and Public Opinion is an authoritative and key reference text for students, academics and researchers engaged in the study of electoral research, public opinion and voting behavior.

`The Handbook very nicely covers all the topics related to the study of elections, voting and public opinion: the most influential theories and methods, both turnout and vote choice, both the individual-level and the contextual determinants, the roles of both voters and parties. The review essays are written by top scholars in the field, with a crucial cross-national perspective. An essential reading for all those who study and/or teach political behavior.' - Andre Blais, Universite de Montreal, Canada.

`This Handbook takes stock of 50 years of research into elections, voting behavior and public opinion. It is well structured and a stellar cast of authors presents the state of the art in a comprehensive fashion. This monumental volume is a true landmark. It is a must-read for all those interested in elections and democratic politics.' - Hans-Dieter Klingemann, Social Science Research Center Berlin, Germany.

Part I: Theoretical Approaches to Study of Voter Behavior

2. The Sociological and Social-Psychological Approaches [Vincent Hutchings and Hakeem Jefferson]

5. The Big Picture: Turnout at the Macro Level [Jack Vowles]

6. Demographic and the Social Bases of Voter Turnout [Eric Plutzer]

7. Turnout and the Calculus of Voting: Recent Advances and Prospects for Integration with Theories of Campaigns and Elections [John Aldrich and Libby M. Jenke]

8. Voting and the Expanding Repertoire of Participation [Jan van Deth]

Part IV: The Role of Context and Campaigns

23. Persuasion and Mobilization Effects by Parties and Candidates [Justin Fisher]

30. Is There a Rational Public? [Jorgen Bolstad]

31. The Geometry of Party Competition. Parties and Voters in the Issue Space [Lorenzo de Sio]

31. The Thermostatic Model: The Public, Policy and Politics [Christopher Wlezien]

37. The Use of Aggregate Data in the Study of Voting Behavior: Ecological Inference, Ecological Fallacy and Other Applications [Luana Russo]

GOR009974207
The Routledge Handbook of Elections, Voting Behavior and Public Opinion by Edited by Justin Fisher (Brunel University, UK)
Edited by Justin Fisher (Brunel University, UK)
Routledge International Handbooks
Used - Very Good
Hardback
Taylor & Francis Ltd
2017-09-26
550
1138890405
9781138890404
N/A
Book picture is for illustrative purposes only, actual binding, cover or edition may vary.
This is a used book - there is no escaping the fact it has been read by someone else and it will show signs of wear and previous use. Overall we expect it to be in very good condition, but if you are not entirely satisfied please get in touch with us.