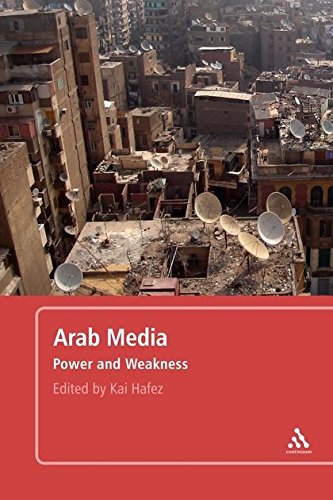 In Stock
£4.99
Ever since the events of 9/11, great attention has been paid to Arab mass media by politicians, experts and journalists around the world. This book evaluates, revises, and stimulates the academic debate on Arab media.
Very Good
Only 1 left

Arab Media: Power and Weakness by Edited by Kai Hafez

Ever since the events of 9/11, great attention has been paid to Arab mass media by politicians, experts and journalists around the world. Many have argued that Arab media has been the catalyst for various political and social developments ranging from democracy to political radicalization and from Westernization to Arab and Muslim cultural renaissance. Much of the debate, however, has been too narrowly focused - particularly on the famous TV network Al-Jazeera. This leaves the majority of the dynamic Arab media unnoticed. Moreover, the existing scholarly literature on the subject often lacks theoretical and empirical sophistication, and it is these gaps that this book will address.The editor of "Arab Media: Power and Weakness" has invited the best scholars on the subject, from around the world, to participate, with the aim of evaluating, revising, and stimulating the academic debate on Arab media."Arab Media: Power and Weakness" is comprised of research synopses (comprehensive overviews over the current academic literature and "blind spots" of research in one of the above mentioned fields); original empirical research; and theoretical papers.The result is a comprehensive handbook of up-to-date research and scholarship on this important and fast-changing subject, which will be of use to all students and researchers of the contemporary Arab world.

Arab Media: Power and Weakness gives a sophisticated and timely assessment of the emergent literature on mass media in the Arab world. The book brings what has been done into focus, and more importantly, sets out clear agendas for what needs to be done in the future. It puts the Arab world squarely in the mainstream of media studies, and will also be of great value for everyone concerned with the modern Middle East.

A remarkable, diverse and thought provoking survey of the state of knowledge about Arab media and its effects on audiences. Newcomers to the topic will be fascinated by the range of fundamental questions in the field that remain unanswered. Veterans will be dazzled by the diversity of insights and new observations contained here.

About Edited by Kai Hafez

Kai Hafez is Professor at the University of Erfurt, Germany and Senior Associate Fellow, St Anthony's College, Oxford. He is the author of Islam and the West in the Mass Media and Media, Politics and Society in the Middle East.

GOR010305495
Arab Media: Power and Weakness by Edited by Kai Hafez
Edited by Kai Hafez
Used - Very Good
Paperback
Bloomsbury Publishing PLC
2008-12-15
288
0826428363
9780826428363
N/A
Book picture is for illustrative purposes only, actual binding, cover or edition may vary.
This is a used book - there is no escaping the fact it has been read by someone else and it will show signs of wear and previous use. Overall we expect it to be in very good condition, but if you are not entirely satisfied please get in touch with us.