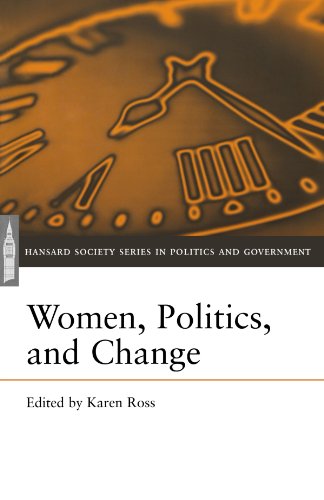 In Stock
£9.99
Women, Politics, and Change offers a range of perspectives on the role of women in formal politics in a variety of political contexts, from mature to more emergent democratic systems. The wide geographical range - from Africa to Europe, from China to Australia - is a significant strength of the book, as is the diversity of its methodological approaches and techniques.
Very Good
Only 1 left

Women, Politics, and Change is concerned with the relationship between women and politics from a variety of perspectives covering a wide range of geographical as well as political contexts. Essays span the theory/practice divide and everything between, from chapters which look at the broad theoretical discussions concerning symbolic and substantive representation of and by women within formal politics, through to empirically informed studies based on interviews with women parliamentarians and women activists. Contributors are keen to analyze the contribution that women have made and continue to make to the development of the democratic project, through their different perspectives and (sometimes different) concerns. Crucially, though, many of the contributions explore the tensions which still exist for women when they attempt to work effectively in contexts which have been traditionally hostile to women, and to examine the strategies which women devise to push a differently nuanced political agenda forward. Unusually, the political contexts that form the foci of this collection include both the 'usual suspects' of developed Western democracies but also news of and from other places, such as Kosova, China, Iran and Africa, where we still know relatively little about their political systems and even less about the gendered dimension of their political worlds. Closer to (the European) home, we can no longer speak of Westminster as the only seat of British Government. The past three years have seen the setting up of Assemblies in Wales, Northern Ireland and London and a Parliament in Scotland, and the role of women in both the background and the foreground of those new political structures has been significant. The book carries on where Women in Politics, an earlier title in this series, left off. Then, the contributions were exclusively British, whereas the great strength of this volume lies precisely in the diversity of its geographical foci, spanning several continents as well as exploring many different parliamentary, social, economic and cultural environments. This more inclusive focus reflects a shift in the Zeitgeist which is pushing outwards instead of inwards, at least as far as many women scholars are concerned, but also reflects a desire to map the differences that women can make and are making in the lives of the world's citizens, and to explore if sisters are doing it for others as well as themselves.

Many of the articles have the advantage of utilizing very up-to-date case study materials that address a range of important contemporary issues. In combination with the clear and accessible style of the volume, it means that this collection will be invaluable for teaching. * Georgina Waylen, Democratization *

GOR008557149
Women, Politics, and Change by Edited by Karen Ross (Coventry University)
Edited by Karen Ross (Coventry University)
Hansard Society Series in Politics and Government
Used - Very Good
Paperback
Oxford University Press
2002-04-01
220
0198515413
9780198515418
N/A
Book picture is for illustrative purposes only, actual binding, cover or edition may vary.
This is a used book - there is no escaping the fact it has been read by someone else and it will show signs of wear and previous use. Overall we expect it to be in very good condition, but if you are not entirely satisfied please get in touch with us.