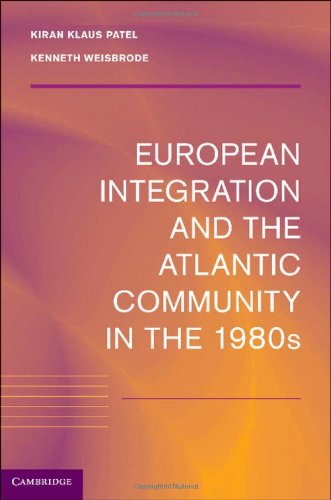 European Integration and the Atlantic Community in the 1980s
by Edited by Kiran Klaus Patel (Universiteit Maastricht, Netherlands)

In Stock
£44.99
These essays, by prominent scholars from Europe and the United States, examine political relations in the 1980s and offer an original research agenda for work on the period in multiple fields of political, social, economic and cultural history.
Very Good
Only 1 left

European Integration and the Atlantic Community in the 1980s Summary

European Integration and the Atlantic Community in the 1980s by Edited by Kiran Klaus Patel (Universiteit Maastricht, Netherlands)

This unique collection of essays lays the groundwork for the study of the intersection of European integration and transatlantic relations in the 1980s. With archives for this period only recently being opened, scholars are beginning to analyse and understand what some have called a peak moment in the European project and others have called the Second Cold War. How do these moments intersect and relate to one another? These essays, by prominent scholars from Europe and the United States, examine these and related questions while challenging the '1980s' itself as a useful demarcation for historical analysis.

European Integration and the Atlantic Community in the 1980s Reviews

"This is a most important book not only for the new answers it offers but even more for the new questions it poses. By searching for connections and by bridging the gaps, between different fields of historical research, it challenges consolidated interpretive paradigms and the very way we unfortunately tend to compartmentalize our study and understanding of international history." -- Leopoldo Nuti, Professor of International Relations History, Roma Tre University
"European Integration and the Atlantic Community in the 1980s is a welcome addition to the literature of a relatively neglected decade. In chapters dealing with security, economics, technology, and, above all, ideas, it reveals the complex interaction between European integration and the Atlantic community -- complementary yet competitive, sometimes conflictual but always essential. With both sides of the Atlantic facing daunting twenty-first century challenges, this volume helps us better prepare for the future by better understanding our recent past." -- Robert Hutchings, Dean of the Lyndon B. Johnson School of Public Affairs at The University of Texas at Austin
"There are very few time -periods in world history where path-breaking changes take place almost at once: the 1980s is one of them. In 1989, the Berlin wall came down, ending the Cold War. The early 1980s witnessed one of the most intensive conflicts in transatlantic relations when the arms buildup fostered by U.S. President Ronald Reagan met stiff resistance by peace movements on either side of the Atlantic. Last not least, the European integration project took a major leap forward with the Single European Act in 1986, leading to the Maastricht Treaty in the early 1990s, which initiated the European monetary union. This volume takes a long-awaited look at this historic decade and the changes it brought about. The authors put the 1980s in perspective of the long duree and analyze in detail the international and domestic repercussions of events, including the various transatlantic networks' interactions with each other. As a result, a most interesting decade in the transatlantic relationship comes to life again. The editors have done a marvelous job of bringing together a superb collection of essays from a variety of perspectives. A must-read for anybody interested in European and Atlantic affairs!" -- Thomas Risse, Otto Suhr Institute for Political Science, Freie Universitat Berlin

Kiran Klaus Patel is Professor of European and Global History at Maastricht University, The Netherlands. He is the author of Soldiers of Labor: Labor Service in Nazi Germany and New Deal America (Cambridge University Press, 2005), co-editor of The United States and Germany during the 20th Century: Competition and Convergence (Cambridge University Press, 2010) and co-editor of Europeanization in the Twentieth Century: Historical Approaches (2010). Kenneth Weisbrode is Assistant Professor of History at Bilkent University, Turkey. He is author of On Ambivalence (2012) and The Atlantic Century (2009), and co-editor of The Paradox of a Global USA (2007).

1. Introduction: old barriers, new openings Kiran Klaus Patel and Kenneth Weisbrode; 2. The unnoticed apogee of Atlanticism? US-Western European relations during the early Reagan era N. Piers Ludlow; 3. More cohesive, still divergent: western Europe, the United States, and the Madrid CSCE follow-up meeting Angela Romano; 4. The deal of the century: the Reagan administration and the Soviet pipeline Ksenia Demidova; 5. Poland's solidarity as a contested symbol of the cold war: transatlantic debates after the Polish crisis Robert Brier; 6. The European community and the paradoxes of American economic diplomacy: the revealing case of the IT and telecommunications sectors Arthe van Laer; 7. The European community and international Reaganomics, 1981-5 Duccio Basosi; 8. Did transatlantic drift help European integration? The Euromissiles crisis, the strategic defense initiative, and the quest for political cooperation Philipp Gassert; 9. A transatlantic security crisis? Transnational relations between the West German and the US peace movements, 1977-85 Holger Nehring; 10. Reviving the transatlantic community? The successor generation concept in US foreign affairs Giles Scott-Smith; 11. The re-launching of Europe in the mid-1980s Antonio Varsori; 12. A shift in mood: the 1992 initiative and changing American perceptions of the European community, 1988-9 Mark Gilbert; 13. France, the United States, and NATO: between Europeanization and re-Atlanticization, 1990-1 Frederic Bozo; 14. Afterword Kiran Klaus Patel and Kenneth Weisbrode.

GOR009953001
European Integration and the Atlantic Community in the 1980s by Edited by Kiran Klaus Patel (Universiteit Maastricht, Netherlands)
Edited by Kiran Klaus Patel (Universiteit Maastricht, Netherlands)
Used - Very Good
Hardback
Cambridge University Press
2013-09-02
315
1107031567
9781107031562
N/A
Book picture is for illustrative purposes only, actual binding, cover or edition may vary.
This is a used book - there is no escaping the fact it has been read by someone else and it will show signs of wear and previous use. Overall we expect it to be in very good condition, but if you are not entirely satisfied please get in touch with us.