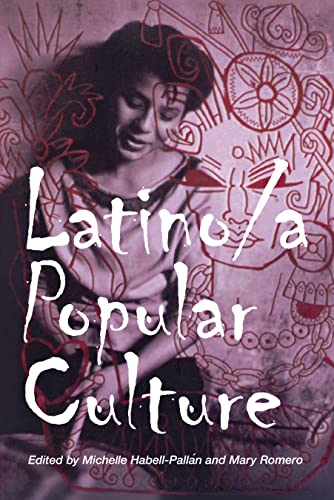 In Stock
£2.99
In this volume the editers have brought together scholars from the humanities and social sciences to analyse representations of Latinidad in a diversity of genres - media culture, music, film, theatre, art and sports - that are emerging across the US, in relation to different groups.
Very Good
Only 1 left

The book provides an insight into the current struggles that Latinos who live in the norhern hemisphere face. * MELUS *
Latino/a Popular Culture greatly contributes to the genres of both cultural studies and Latino studies. The editors exhort undergraduate and graduate students to continue looking at Latino/a popular coluture as "as site of invention, critique and pleasure" (p.16) since much work still needs to be done in this area. * Harvard Educational Review *
With stunning, eloquent, and insightful essays Latina and Latino Popular Culture offers the best guide to the cultural production of the largest group of people of color in the United States. The essays broaden both our knowledge of Latino/a cultural production and challenge the traditional paradigms of cultural and ethnic studies doing so through accessible, historically informed approaches. -- Mary Pat Brady,Cornell University

About Edited by Michelle Habell-Pallan

Michelle Habell-Pallan is an Associate Professor in the Women Studies Department at the University of Washington, Seattle. She is the co-editor with Mary Romero of Latino/a Popular Culture (NYU Press, 2002). Mary Romero is Professor of Justice Studies at Arizona University. She is the author or editor of many books, including Maid in the U.S.A.. In 2012, she was awarded the Julian Samora Distinguished Career Award by the Latino/Latina Sociology Section of the American Sociological Association.

1 Talking Back: Spanish Media and U.S. Latinidad 2 Barbie's Hair: Selling Out Puerto Rican Identity in the Global Market 3 The Buena Vista Social Club: The Racial Politics of Nostalgia 4 "Lemme Stay, I Want to Watch": Ambivalence in Borderlands Cinema 5 Encrucijadas: Ruben Blades at the Transnational Crossroads 6 "The Sun Never Sets on MTV": Tijuana NO! and the Border of Music Video 7 Bidi Bidi Bom Bom: Selena and Tejano Music in the Making of Tejas 8 Hip Hop and New York Puerto Ricans 9 Paul Simon's The Capeman: The Staging of Puerto Rican National Identity as Spectacle and Commodity on Broadway 10 Gender Bending in Latino Theater 11 "Don't Call Us Hispanic": Popular Latino Theater in Vancouver 12 A Decidedly "Mexican" and "American" Semi[er]otic Transference 13 Performing Multiple Identities: Guillermo Gomez-Pena and His "Dangerous Border Crossings" 14 Learning America's Other Game: Baseball, Race, and the Study of Latinos 15 Futbol Nation: U.S. Latinos and the Goal of a Homeland 16 Boxing and Masculinity: The History and (Her)story of Oscar de la Hoya

GOR008313602
Latino/a Popular Culture by Edited by Michelle Habell-Pallan
Edited by Michelle Habell-Pallan
Used - Very Good
Paperback
New York University Press
2002-06-01
280
0814736254
9780814736258
N/A
Book picture is for illustrative purposes only, actual binding, cover or edition may vary.
This is a used book - there is no escaping the fact it has been read by someone else and it will show signs of wear and previous use. Overall we expect it to be in very good condition, but if you are not entirely satisfied please get in touch with us.