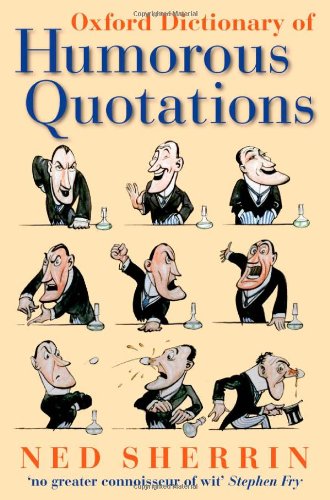 Oxford Dictionary of Humorous Quotations
by Edited by Ned Sherrin

In Stock
£4.49
The late Ned Sherrin's personal choice of humorous quotations, from witty one-liners to the punchlines of sparkling anecdotes. Laugh at - and borrow! - gems from classic writers and humorists, from Oscar Wilde and Groucho Marx to Jerry Seinfeld and Russell Brand.
Like New Very Good
Only 1 left

Oxford Dictionary of Humorous Quotations by Edited by Ned Sherrin

This hilarious collection of humorous quotations, full of wisecracks and wit, snappy comments and inspired fantasy, has been specially compiled by the late broadcaster and raconteur Ned Sherrin, with a foreword by leading British satirist, Alistair Beaton. Now packed with even more quotes and covering more subjects than before, from Weddings to the Supernatural, Australia to Headlines. Find the best lines from your favourite jokesters and wordsmiths, add that extra something to a speech or presentation, or just enjoy a good laugh. 'A chair is a piece of furniture. I am not a chair because no one has ever sat on me.' Ann Widdecombe on the announcement that Parliamentary language will now be gender-neutral. 'No wonder Bob Geldof is such an expert on famine. He's been feeding off 'I don't like Mondays' for 30 years.' Russell Brand On deciding to run for governor of California: 'The most difficult decision I've ever made in my entire life, except for the one in 1978 when I decided to get a bikini wax.' Arnold Schwarzenegger 'Wanting to know an author because you like his work is like wanting to know a duck because you like pate.' Margaret Atwood 'I am so sorry. We have to stop there.I have just come to the end of my personality. ' Quentin Crisp, closing down an interview

About Edited by Ned Sherrin

Ned Sherrin is one of Britain's best known comic writers. The producer and director of the legendary 1960s TV show That Was The Week That Was, he has written for the stage and screen, directed many theater productions, and compiled a number of anthologies, including Ned Sherrin in His Anecdotage and I Wish I'd Said That.

INTRODUCTION; HOW TO USE THE DICTIONARY; LIST OF THEMES; QUOTATIONS; AUTHOR INDEX; KEYWORD INDEX

GOR010485203
Oxford Dictionary of Humorous Quotations by Edited by Ned Sherrin
Edited by Ned Sherrin
Oxford Quick Reference
Used - Like New
Hardback
Oxford University Press
2008-09-25
576
0199237166
9780199237166
N/A
Book picture is for illustrative purposes only, actual binding, cover or edition may vary.
This is a used book - there is no escaping the fact it has been read by someone else and it will show signs of wear and previous use. Overall we expect it to be in very good condition, but if you are not entirely satisfied please get in touch with us.