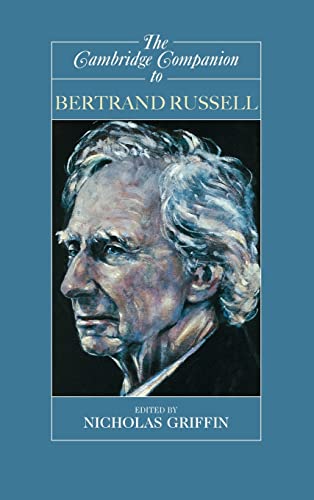 In Stock
£45.99
Bertrand Russell ranks as one of the giants of twentieth-century philosophy. Through his books, journalism, correspondence and political activity he exerted a profound influence on modern thought.
Very Good
Only 1 left

Bertrand Russell ranks as one of the giants of twentieth-century philosophy. Through his books, journalism, correspondence and political activity he exerted a profound influence on modern thought. This companion centers on Russell's contributions to modern philosophy and, therefore, concentrates on the early part of his career. There are chapters on Russell's contributions to the foundations of mathematics, and on his development of logical methods in philosophy and their application to such fields as epistemology, metaphysics and the philosophy of language. The intellectual background to his work is covered, as is his engagement with such contemporaries as Frege and G. E. Moore. The final chapter considers Russell as a moral philosopher. New readers will find this the most convenient and accessible guide to Russell available. Advanced students and specialists will find a conspectus of recent developments in the interpretation of Russell.

'All academic libraries catering for serious philosophers will want to stock copies of this book, to sit alongside the 28 volumes of Russell's collected papers and his 22 monograph philosophical works.' Reference Reviews
'This book does the job of a Companion extremely well whilst managing a few surprises along the way. We are given a wealth of historical background material surrounding Russell's early work that is extremely well researched and, at times, highly illuminating, together with clarity and coherence of exposition regarding some extremely challenging areas in logic, mathematics, philosophy of language, metaphysics and epistemology. This is combined with original and interesting interpretation that can meet the demands of more advanced Russell scholars without detracting from its usefulness as a reference work. Doubtless this will prove a valuable addition to work on Russell for many years to come.' British Journal for the History of Philosophy
"...the editor and authors have done a tremendous job selectively choosing topics and themes within Russell's philosophical work to focus on. ...there is nothing to compare to it in providing an accessible but comprehensive introduction to Russell's philosophy..." The Bertrand Russell Society Quarterly
"Unequalled by any other collection of essays on Russell." Journal of Bertrand Russell studies
"Despite the editor's modest claims for the book, The Cambridge Companion to Bertrand Russell succeeds in giving an accurate, multi-dimensional account of Russell's early and late epistemological, metaphysical and moral theories, one that shows the continuity in the development of his philosophy." u De Philosophia, Iva Apostolova
"There is no work currently available that would provide a better overall guide to Russell's philosophy and views of logic. It is certainly worth a read for studetns and scholars in philosophy and logic alike." Kevin C. Klement, University of Massachusetts

GOR009947173
The Cambridge Companion to Bertrand Russell by Edited by Nicholas Griffin (McMaster University, Ontario)
Edited by Nicholas Griffin (McMaster University, Ontario)
Cambridge Companions to Philosophy
Used - Very Good
Hardback
Cambridge University Press
2003-06-30
572
0521631785
9780521631785
N/A
Book picture is for illustrative purposes only, actual binding, cover or edition may vary.
This is a used book - there is no escaping the fact it has been read by someone else and it will show signs of wear and previous use. Overall we expect it to be in very good condition, but if you are not entirely satisfied please get in touch with us.