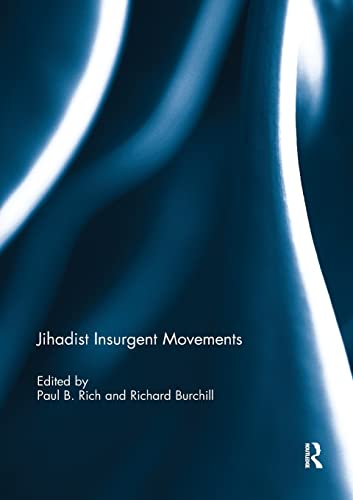 Jihadist Insurgent Movements
by Edited by Paul B. Rich

Jihadist Insurgent Movements by Edited by Paul B. Rich

This path-breaking collection of papers examines the phenomenon of jihadist insurgent movements in the Middle East and North, East and West Africa. It argues that military and strategic analysts have paid insufficient attention to the phenomenon of jihadism in insurgent movements, partly due to a failure to take the role of religion sufficiently seriously in the ideological mobilisation of recruits by guerrilla movements stretching back to the era of "national liberation" after World War Two. Several essays in the collection examine Al Qaeda and ISIL as military as well as political movements while others assess Boko Haram in West Africa, Al Shabaab in Somalia and jihadist movements in Libya. Additionally, some authors discuss the recruitment of foreign fighters and the longer-term terrorist threat posed by the existence of jihadist movements to security and ethnic relations in Europe

Overall, this volume fills an important niche between studies that look at Islamic fundamentalism and "global jihad" at the international level and micro studies that look at movements locally. It poses the question whether jihadist insurgencies are serious revolutionary threats to global political stability or whether, like Soviet Russia after its initial revolutionary phase of the 1920s, they can be ultimately contained by the global political order. The volume sees these movements as continuing to evolve dynamically over the next few years suggesting that, even if ISIL is defeated, the movement that brought it into being will still exist and very probably morph into new movements. Jihadist Insurgent Movements was originally published as a special issue of Small Wars & Insurgencies.

About Edited by Paul B. Rich

Paul B. Rich is co-editor of Small Wars and Insurgencies and the author of several books and articles on insurgency, counter-insurgency, terrorism and warlords. He has taught at the universities of Bristol, Warwick and Melbourne and is currently completing a book entitled Cinema and Unconventional War: Insurgency, Terrorism and Special Operations on screen, 1930-2015. Richard Burchill is the Director of Research and Engagement for TRENDS: Research & Advisory. Previously he was with the Law School at the University of Hill where he was also Director of the McCoubrey Centre for International Law. He engages in teaching and consultancy work with international organisations and national governments.

3. The Islamic State and the Return of Revolutionary Warfare Craig Whiteside

4. How revolutionary are Jihadist insurgencies? The case of ISIL Paul B. Rich

7. Belgian and Dutch Jihadist Foreign Fighters (2012-2015): Characteristics, Motivations, and Roles in the War in Syria and Iraq Edwin Bakker and Roel de Bont

8. Who Goes, Why, and With What Effects: The Problem of Foreign Fighters from Europe Lasse Lindekilde, Preben Bertelsen and Michael Stohl

12. Shapeshifter of Somalia: Evolution of the Political Territoriality of Al-Shabaab Bohumil Dobos

13. Jihadist insurgency and the prospects for peace and security Richard Burchill

GOR009937620
Jihadist Insurgent Movements by Edited by Paul B. Rich
Edited by Paul B. Rich
Used - Very Good
Paperback
Taylor & Francis Ltd
2019-03-22
258
0367251930
9780367251932
N/A
Book picture is for illustrative purposes only, actual binding, cover or edition may vary.
This is a used book - there is no escaping the fact it has been read by someone else and it will show signs of wear and previous use. Overall we expect it to be in very good condition, but if you are not entirely satisfied please get in touch with us.