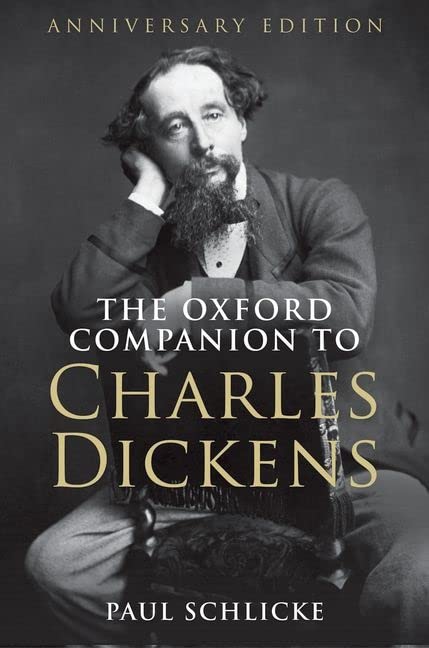 In Stock
£18.99
This anniversary edition of the Oxford Companion to Charles Dickens celebrates 200 years since the birth of one of Britain's most popular authors. Covering his life, his works, his reputation, and his cultural context in over 500 A-Z articles, this is the most reliable and accessible reference work on Dickens available
Very Good
Only 1 left

The Oxford Companion to Charles Dickens: Anniversary edition by Edited by Paul Schlicke (University of Aberdeen)

Reissued to celebrate the bicentenary of Charles Dickens's birth, The Oxford Companion to Charles Dickens (formerly The Oxford Reader's Companion to Dickens) draws together an unparalleled diversity of information on one of Britain's greatest writers: covering his life, his works, his reputation, and his cultural context. Featuring more than 500 A-Z articles, it throws new and often unexpected light on the most familiar of Dickens's works, and explores the experiences, events, and literature on which he drew. There is also a chronology of Dickens' life, a list of characters in his works, a list of entries by theme, a family tree, three maps, an invaluable bibliography, and a general index. Compiled by a distinguished editorial team, and written in a lucid, easy style that would have pleased him, The Oxford Companion to Charles Dickens offers a more authoritative and accessible range of information than any other reference work on Dickens. Aspects covered include: The private man and the public figure - his family, friends, colleagues, and convictions The age in which he lived and worked - the people, events, and institutions that informed his writing The places that were significant to him - his homes, his London, and the countries he visited The ideas and social theories of the time - the attitudes he satirized and the ideologies he advocated The works on which his reputation rests - their history, structure, inspiration, and significance

This is a book where most redundant matter has been left out, and where a simple (and therefore memorable) yet comprehensive scheme of variations across the democratic phenomenon is presented and discussed ... I find that the book makes democratic theory very accessible. It will definitely be on my bookshelf, right next to classics on the subject by, for instance, Lijphart, Held and Dahl. * Ulrik Kjaer, Local Government Studies, 38:2 *
This is a valuable book ... mostly superb * Times Literary Supplement *

About Edited by Paul Schlicke (University of Aberdeen)

Dr Paul Schlicke is an internationally renowned Dickens scholar, whose works include Dickens and Popular Entertainment (1985), several Dickens critical editions, including Oxford World's Classics editions of Hard Times (1989) and Nicholas Nickleby (1990), as well as Coffee with Dickens (2008), and numerous articles and reviews.

GOR004692512
The Oxford Companion to Charles Dickens: Anniversary edition by Edited by Paul Schlicke (University of Aberdeen)
Edited by Paul Schlicke (University of Aberdeen)
Used - Very Good
Hardback
Oxford University Press
2011-11-10
704
0199640181
9780199640188
N/A
Book picture is for illustrative purposes only, actual binding, cover or edition may vary.
This is a used book - there is no escaping the fact it has been read by someone else and it will show signs of wear and previous use. Overall we expect it to be in very good condition, but if you are not entirely satisfied please get in touch with us.