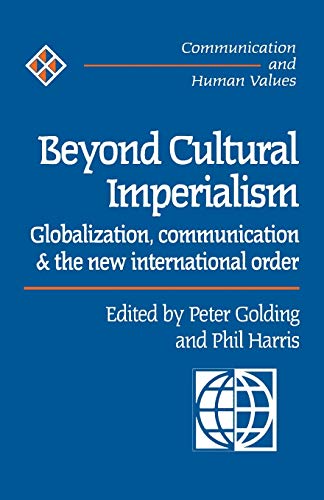 Beyond Cultural Imperialism
by Edited by Peter Golding

In Stock
£3.29
'A thoughtful reflection on the concept of the state in the context of post-colonial realities and a very uesful historical investigation of imperialism as cultural contact, which in a very timely way calls for the cross-fertilisaton of debates in international communiction by post-colonial studies' - Media Development
Very Good
Only 1 left

Beyond Cultural Imperialism: Globalization, Communication and the New International Order by Edited by Peter Golding

Moving beyond notions of cultural imperialism, this book furthers our understanding of the implications of global media culture and politics in the 1990s.

Leading scholars from a range of fields bring different perspectives to bear on the role of the state, the range of culture beyond the media, the contribution of international organizations, and the potential for resistance and alternatives. They reflect on the `New World International Communications Order' as delineated since the 1970s, and examine its changing nature. Throughout, they connect analysis of the flows and forces which form the world media and communications with the fundamental themes of social science, and illuminate the ways in which underlying questions of inequality, power and control reappear within new media environments.

`Once one gets beyond the excellently provocative introductions.... a thoughtful reflection on the concept of the state in the context of post-colonial realities and a very uesful historical investigation of imperialism as cultural contact, which in a very timely way calls for the cross-fertilisaton of debates in international communiction by post-colonial studies, the remaining six chapters all analyse the hopes and failings of NWICO [New World Information and Communication Order] from a number of perspectives. These are very useful in their own right - what went wrong and how a new order might be activated' - Media Development

About Edited by Peter Golding

Peter Golding was Professor of Sociology at Loughborough University from 1990 until coming to Northumbria in August 2010. He was Head of Social Sciences at Loughborough from 1991-2006, and Pro Vice-Chancellor (Research) 2006-2009. He was a member of the national Research Assessment Exercise panel for communications, media and cultural studies in 1996 and 2001, and its Chair in 2008, Vice-Chair of the ESRC postgraduate Recognition Panel for sociology and media and cultural studies, and chair of the HEFCE Media Studies Advisory Committee. He is an editor of the European Journal of Communication, Hon. Chair of the European Sociological Association Media Research Network, and was Co-Chair of the European Science Foundation Programme 'Changing Media, Changing Europe'. He was founder Chair of the subject association for his field, from 1993-1999, since when he has been Hon. Sec. of its successor body, the Media, Communication and Cultural Studies Association, and is a member of the UK UNESCO Commission Communications and Information Committee. Professor Golding has been a Visiting Professor at universities in Switzerland, New Zealand, Japan, Estonia and Brazil and has lectured and taught in over 20 countries.

Foreword - Peter Golding and Phil Harris Introduction - Peter Golding and Phil Harris Reflections on the International System - Samir Amin States of the State and Third Worlds - Tony Barnett The Many Cultural Faces of Imperialism - Annabelle Sreberny-Mohammadi MacBride with Hindsight - Cees Hamelink The Western World and the NWICO - Colleen Roach United They Stand? From Optimism to Reality - Mohammed Musa An Overview of Third World News Agencies Communication and Global Security - Phil Harris The Challenge for the Next Millennium An Inclusive NWICO - Pradip N Thomas Cultural Resilience and Popular Resistance The Future of the Debate - Richard C Vincent Setting an Agenda for a New World Information and Communication Order: Ten Proposals

GOR008233351
Beyond Cultural Imperialism: Globalization, Communication and the New International Order by Edited by Peter Golding
Edited by Peter Golding
Communication and Human Values series
Used - Very Good
Paperback
SAGE Publications Inc
1996-12-18
272
0761953310
9780761953319
N/A
Book picture is for illustrative purposes only, actual binding, cover or edition may vary.
This is a used book - there is no escaping the fact it has been read by someone else and it will show signs of wear and previous use. Overall we expect it to be in very good condition, but if you are not entirely satisfied please get in touch with us.