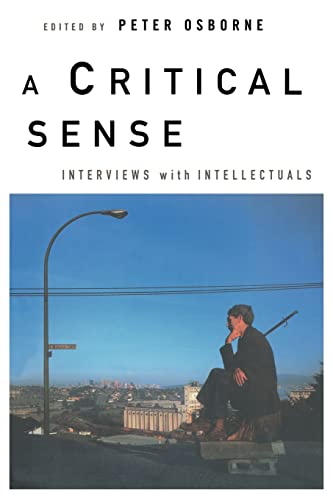 A Critical Sense
by Edited by Peter Osborne

In Stock
£3.59
From Marxism to psychoanalysis, deconstruction to queer theory, this work reveals the differing traditions and lines of thought which make up the interdisciplinary culture of the intellectual Left. Judith Butler, Cornelius Castoriadis, Drucilla Cornell and Axel Honneth are included.
Good
Only 1 left

A Critical Sense: Interviews with Intellectuals by Edited by Peter Osborne

A Critical Sense brings together in a single volume the leading figures of contemporary radical theory. Moving freely between philosophy, politics and cultural studies, it offers a fascinating overview of the lines of thought of today's intellectual left.
Marxism, feminism, psychoanalysis and critical theory, literary studies, deconstruction, pragmatism, postcolonial and queer theory are discussed in a series of interviews from the journal Radical Philosophy. Those interviewed are:
Judith Butler
Cornelius Castoriadis
Drucilla Cornell
Axel Honneth
Istvan Meszaros
Edward Said
Renata Salecl
Gayatri Chakravorty Spivak
Cornel West
Slavoj Zizek
For those unfamiliar with the often daunting work of some of today's most important thinkers, ACritical Sense will offer an ideal introduction; for those already acquainted with the writings of the theorists interviewed here, the collection will throw new - and often surprising - light on familiar ground.

"Rigorous almost to the point of impertinence, these interviews hold fashionable thought to the highest standard. We watch as these thinkers earn their celebrity, and thus we can see that they are sexier as thinkers, finally, than they are as celebrities."
-Bruce Robbins, Professor of English and Comparative Literature, Rutgers University

GOR010193707
A Critical Sense: Interviews with Intellectuals by Edited by Peter Osborne
Edited by Peter Osborne
Used - Good
Paperback
Taylor & Francis Ltd
1996-12-05
216
041511506X
9780415115063
N/A
Book picture is for illustrative purposes only, actual binding, cover or edition may vary.
The book has been read but remains in clean condition. All pages are intact and the cover is intact. Some minor wear to the spine.