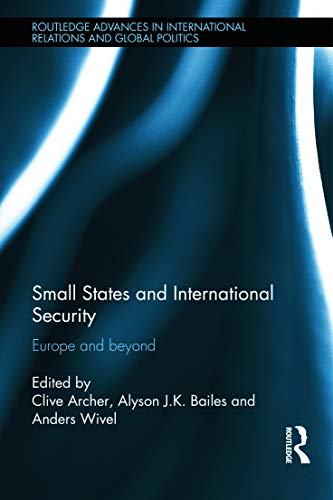 In Stock
£59.99
"This book offers an accessible, coherent and informative analysis of contemporary and future security challenges facing small states and provides a comparative perspective"-- Provided by publisher.
Very Good
Only 1 left

Small States and International Security: Europe and Beyond by Edited by Professor Clive Archer

This book explains what `small' states are and explores their current security challenges, in general terms and through specific examples. It reflects the shift from traditional security definitions emphasizing defence and armaments, to new security concerns such as economic, societal and environmental security where institutional cooperation looms larger. These complex issues, linked with traditional power relations and new types of actors, need to be tackled with due regard to democracy and good governance. Key policy challenges for small states are examined and applied in the regional case studies.

The book deals mainly with the current experience and recent past of such states but also offers insights for their future policies. Although many of the states covered are European, the study also includes African, Caribbean and Asian small states. Their particular interest and relevance is outlined, as is the connection between their security challenges and their smallness. Policy lessons for other states are then sought.

The book is the first in-depth, multi-continent study of security as an aspect of small state governance today. It is novel in placing the security dilemmas of small states in the context of wider ideas on international and institutional change, and in dealing with non-European states and regions.

About Edited by Professor Clive Archer

Clive Archer was, until 2009, Research Professor in International Relations at Manchester Metropolitan University and was previously a Professor at Aberdeen University. He has researched and published widely on the affairs of the Nordic region, Arctic cooperation, international organizations and the European Union. Alyson J.K. Bailes is a former British diplomat and Director of the Stockholm International Peace Research Institute, now working as an Adjunct Professor at the University of Iceland and a Visiting Professor at the College of Europe. Security studies are her speciality. Anders Wivel is an Associate Professor in the Department of Political Science, University of Copenhagen. His most recent books are Explaining Foreign Policy: International Diplomacy and the Russo-Georgian War (Lynne Rienner 2012, co-author Hans Mouritzen) and Denmark and the European Union (Routledge 2013, co-editor Lee Miles).

GOR008201300
Small States and International Security: Europe and Beyond by Edited by Professor Clive Archer
Edited by Professor Clive Archer
Routledge Advances in International Relations and Global Politics
Used - Very Good
Hardback
Taylor & Francis Ltd
2014-02-20
264
0415629985
9780415629980
N/A
Book picture is for illustrative purposes only, actual binding, cover or edition may vary.
This is a used book - there is no escaping the fact it has been read by someone else and it will show signs of wear and previous use. Overall we expect it to be in very good condition, but if you are not entirely satisfied please get in touch with us.