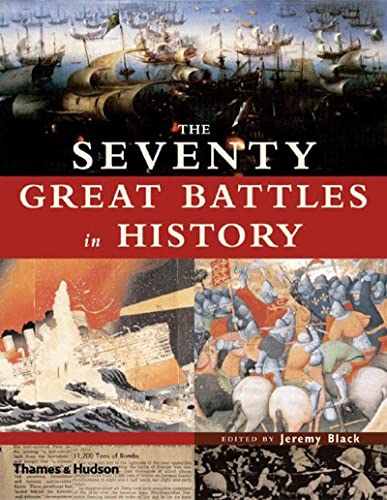 Out of Stock
In this addition to the successful "Seventy" series, a distinguished team of 26 military historians reveals the decisive conflicts that have shaped world history from the 5th century BC.
Very Good
Only 0 left

The Seventy Great Battles of All Time Summary

This comprehensive volume encompasses not just the greatest land battles of all time, but sieges such as Constantinople and Tenochtitlan; naval battles such as Actium, the Armada, Trafalgar and Tsushima; and the crucial conflicts in the air during the Battle of Britain and the American attack on Japan in 1945 right up to the conflict in Iraq.

The coverage is truly worldwide, from the battle in the Teutoburg Forest in AD9, when the Germans annihilated the Romans, to Hataka Bay in 1281, when the Japanese defeated the Mongols, and the first battle of of Panipat in 1526, when the Mughals conquered Hindustan.

Throughout, the reader is presented with a masterly overview of the advances in military technology, how battlefield commanders responded to these changes, and the impact of each battle.

Richly illustrated in colour with hundreds of photographs, contemporary paintings and specially commissioned battle plans, The Seventy Great Battles of All Time is essential reading for anyone interested in military history.

The Seventy Great Battles of All Time Reviews

About Edited by Professor Jeremy Black

Jeremy Black is Professor of History at the University of Exeter and the author or editor of over seventy books, including The Cambridge Illustrated Atlas of Warfare, WorldWar Two: A Military History and, for Thames & Hudson, The Seventy Great Battles of All Time and Great Military Leaders and Their Campaigns

GOR001145295
The Seventy Great Battles of All Time by Edited by Professor Jeremy Black
Edited by Professor Jeremy Black
Used - Very Good
Hardback
Thames & Hudson Ltd
2005-10-07
304
0500251258
9780500251256
N/A
Book picture is for illustrative purposes only, actual binding, cover or edition may vary.
This is a used book - there is no escaping the fact it has been read by someone else and it will show signs of wear and previous use. Overall we expect it to be in very good condition, but if you are not entirely satisfied please get in touch with us.