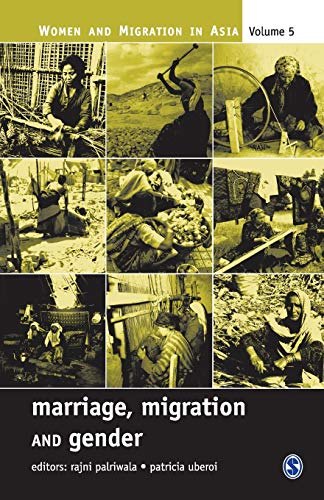 Marriage, Migration and Gender
by Edited by Rajni Palriwala

In Stock
£20.99
Brings a gender-sensitive perspective to bear on aspects of marriage and migration in intra- and transnational contexts. This book considers how, given specific rules of marriage and (post-marital) residence, the institution of marriage may itself entail women's migration.
Very Good
Only 1 left

Marriage, Migration and Gender by Edited by Rajni Palriwala

This is the final volume in the five volume series on Women and Migration in Asia.

The articles in this volume bring a gender-sensitive perspective to bear on aspects of marriage and migration in intra- and transnational contexts. In particular, they consider: a) how, given specific rules of marriage and (post-marital) residence, the institution of marriage may itself entail women's migration; b) how marriage can be used as an individual and family strategy to facilitate migration, and conversely, how migration may become an important factor in the making of marriages; c) the fluid boundaries between matchmaking and trafficking in the context of migration; d) the political economy of marriage transactions; and finally, more broadly, e) the impact of intra- and transnational migration on the institution of marriage, family relations and kinship networks. While most of the articles here concern marriage in the context of transnational migration, it is important- given the reality of uneven development within the different countries of the Asian region - to emphasise the overlap and commonality of issues in both intra- and international contexts.

The collection of articles ... gives insights into the dynamics and interplay of state regulations and immigration laws on migration, which is an emerging area of interest in recent years with increased restrictions on the movement of the people.

This book talked about the differential experience of man and woman when it comes to leaving behind the familiar and travelling, or being forced to travel, in search of better life. The book explore the troubles, dilemmas and the invisibility of migrant woman in Asia.....it even explore how marriages and the rules of kindship force woman to migrate...it present the case studies such as the marriage markets in china, the so-called `mail-order bribes" from Philippines ,Bangladeshi girls sold for marriages...the book seeks to highlights an important areas.

About Edited by Rajni Palriwala

Rajni Palriwala is Professor at the Department of Sociology, University of Delhi. She has taught in various positions at the University of Delhi and at the University of Leiden. Her books and edited collections include Care, Culture and Citizenship: Revisiting the Politics of Welfare in the Netherlands (co-authored, 2005), Changing Kinship, Family, and Gender Relations in South Asia: Processes, Trends and Issues (1994), Shifting Circles of Support: Contextualising Kinship and Gender Relations in South Asia and Sub-Saharan Africa (co-ed., 1996) and Structures and Strategies: Women, Work and Family in Asia (co-ed., 1990). Patricia Uberoi is Director of the Institute of Chinese Studies, Centre for the Study of Developing Societies, Delhi. She was earlier Professor of Social Change and Development at the Institute of Economic Growth, Delhi. In addition to her recently published book, Freedom and Destiny: Gender, Family and Popular Culture in India (2006), she has edited Family, Kinship and Marriage in India (1993), Social Reform, Sexuality and the State (1996), Tradition, Pluralism and Identity (co-ed., 1999) and Anthropology in the East: Founders of Indian Anthropology and Sociology (co-ed., 2007). From 1992 to 2006, she was Co-Editor of Contributions to Indian Sociology.

GOR009964821
Marriage, Migration and Gender by Edited by Rajni Palriwala
Edited by Rajni Palriwala
Women and Migration in Asia
Used - Very Good
Paperback
SAGE Publications Inc
2008-04-15
364
0761936750
9780761936756
N/A
Book picture is for illustrative purposes only, actual binding, cover or edition may vary.
This is a used book - there is no escaping the fact it has been read by someone else and it will show signs of wear and previous use. Overall we expect it to be in very good condition, but if you are not entirely satisfied please get in touch with us.