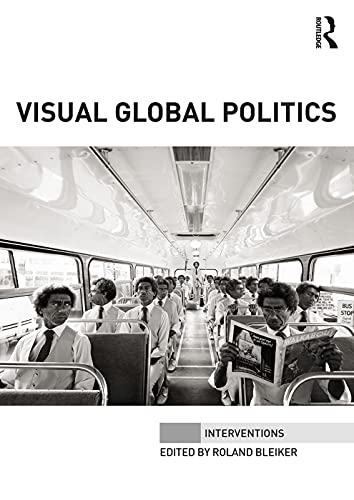 We live in a visual age. Images and visual artefacts shape international events and our understanding of them. Photographs, film and television influence how we view and approach phenomena as diverse as war, diplomacy, financial crises and election campaigns. Other visual fields, from art and cartoons to maps, monuments and videogames, frame how politics is perceived and enacted. Drones, satellites and surveillance cameras watch us around the clock and deliver images that are then put to political use. Add to this that new technologies now allow for a rapid distribution of still and moving images around the world. Digital media platforms, such as Twitter, YouTube, Facebook and Instagram, play an important role across the political spectrum, from terrorist recruitment drives to social justice campaigns.

This book offers the first comprehensive engagement with visual global politics. Written by leading experts in numerous scholarly disciplines and presented in accessible and engaging language, Visual Global Politics is a one-stop source for students, scholars and practitioners interested in understanding the crucial and persistent role of images in today's world.

"This book is a landmark step in addressing the role of visuality in global politics. Rich, diverse, and innovative, it represents a vital contribution to understanding some of the most pressing analytic and political questions of our time."

"This is a wonderful anthology. Typically these alphabetical collections are best for reference, but I was surprised to find myself reading through from one to the next. Many of the entries speak to each another, and together they paint the best available picture of images as "political forces." Visual culture studies has often made the promise of being political in a way that art history hasn't, but this is the only book that puts the politics first. It will be a useful reference for the current political moment, in which each of us has the responsibility to witness, interpret, and also produce political images."

- James Elkins, School of the Art Institute of Chicago, USA

"This sparkling collection of essays brings the visual aspects of global politics to the fore, challenging the traditional scholarly focus on texts. It illuminates the power of images in shaping the way we interpret and respond to global phenomena. The book will quickly become an indispensable resource for all scholars of international politics and law."

"We live in an age of the visual turn in politics, one in which images work upon several registers of life. But the professoriate still mostly responds to politics through the hegemony of the textual. Visual Global Politics takes several huge steps to redress this imbalance. Consisting of multiple image-rich essays, it engages bodies, borders, torture, climate, democracy, security and several other domains by addressing their image/word intertexts. A timely and indispensable volume."

About Edited by Roland Bleiker (University of Queensland, Australia)

Roland Bleiker is Professor of International Relations at the University of Queensland, where he directs an interdisciplinary research program on Visual Politics. Over the past twenty years he has played a leading role in introducing aesthetics, visuality and emotions to the theory and practice of world politics.

GOR009931655
Visual Global Politics by Edited by Roland Bleiker (University of Queensland, Australia)
Edited by Roland Bleiker (University of Queensland, Australia)
Interventions
Used - Very Good
Paperback
Taylor & Francis Ltd
2018-02-07
390
0415726077
9780415726078
N/A
Book picture is for illustrative purposes only, actual binding, cover or edition may vary.
This is a used book - there is no escaping the fact it has been read by someone else and it will show signs of wear and previous use. Overall we expect it to be in very good condition, but if you are not entirely satisfied please get in touch with us.