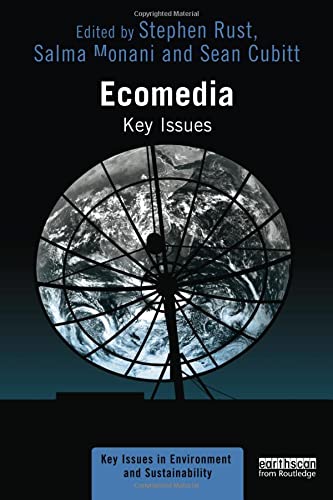 Ecomedia
by Edited by Stephen Rust (University of Oregon, USA)

Each chapter introduces a distinct type of media, addressing it in a theoretical overview before engaging with specific case studies. In this way, the book provides an accessible introduction to each form of media as well as a sophisticated analysis of relevant cases. The book includes contributions from a combination of new voices and well-established media scholars from across the globe who examine the basic concepts and key issues of ecomedia studies. The concepts of "frames," "flow", and "convergence" structure a dynamic collection divided into three parts. The first part addresses traditional visual texts, such as comics, photography, and film. The second part of the book addresses traditional broadcast media, such as radio, and television, and the third part looks at new media, such as advertising, video games, the internet, and digital renderings of scientific data.

In its breadth and scope, Ecomedia: Key Issues presents a unique survey of rich scholarship at the confluence of Media Studies and Environmental Studies. The book is written in an engaging and accessible style, with each chapter including case studies, discussion questions and suggestions for further reading.

"This is a timely, well-conceived, and impactful addition to the growing field of ecologically based cultural studies. Ecomedia: Key Issues powerfully demonstrates how media and the environment are intrinsically linked. Media texts reflect back to us and shape our perceptions of and engagement with the environment. But equally, if not more importantly, this volume illustrates how media systems are materially imbedded in ecological systems: dependent on natural resources for their existence and complicit in the contemporary ecological crisis we face. Collectively, the essays in this collection aptly untangle these complex ecological webs of connectivity, revealing the impact of a diverse set of media texts and practices on planetary health. Adopting a global and interdisciplinary approach, the editors leave no media unturned. Each chapter focuses on a single media, ranging from film, television, radio, advertising and photography, to comic strips, video games, the internet and data vitalization. Divided in three sections offering engaging analyses of particular media, each chapter is well supported by case studies, up-to-date scholarship, and discussion questions. Ecomedia is a must for anyone seeking to deepen their understanding of and reflection about contemporary media culture and practices, and an essential contribution to unpacking the environmental consequences of the digital revolution." -Paula Willoquet-Maricondi, Champlain College, USA

"So much media and communications scholarship is needed to address the importance of facing up the `global challenge' of our age - namely Climate Change and environmental issues generally. This exciting new volume certainly fills a gap, in focusing across aspects of music, games, comics, radio, television as well as film and much else besides.

The overall scope is impressive, covering so many interrelated media formats and is effectively structured using the prism of frames, as well as the concept of flow, which is effectively used to analyse broadcast media. While the notion of convergence captures the interconnecting nature of media formats. It is very useful also to have tightly framed environmental questions accompanying each chapter.

I highly recommend this book for its broad range of contributions and insights across this multi-disciplinary research agenda, focused on a broad range of environmental concerns that will interest scholars and students at all levels." -Pat Brereton, Dublin City University, Ireland

About Edited by Stephen Rust (University of Oregon, USA)

GOR009958039
Ecomedia: Key Issues by Edited by Stephen Rust (University of Oregon, USA)
Edited by Stephen Rust (University of Oregon, USA)
Key Issues in Environment and Sustainability
Used - Good
Paperback
Taylor & Francis Ltd
2015-09-10
258
113878155X
9781138781559
N/A
Book picture is for illustrative purposes only, actual binding, cover or edition may vary.
This is a used book - there is no escaping the fact it has been read by someone else and it will show signs of wear and previous use. Overall we expect it to be in very good condition, but if you are not entirely satisfied please get in touch with us.