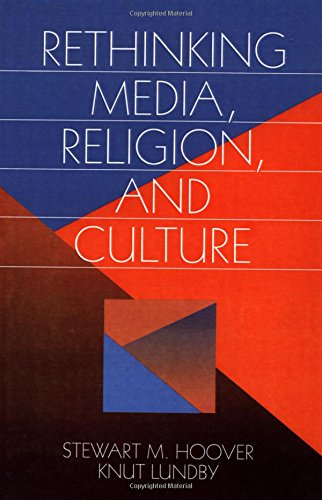 Rethinking Media, Religion, and Culture
by Edited by Stewart Hoover

Rethinking Media, Religion, and Culture by Edited by Stewart Hoover

The growing connections between media, culture and religion are increasingly evident in contemporary society, but until now have rarely been theoretically linked.

The contributors to this volume effectively combine these areas into a coherent whole. The issues they examine include: the decline of religious institutions during the late twentieth century; the increasing autonomy and individualized practice of religion; and the surge of media and media-based icons that are often imbued with religious qualities, and the ensuing effect on cultural practices.

About Edited by Stewart Hoover

Born 1948. Studies at the University of Oslo 1968-1975. Lower degree (cand.mag) 1973 with political science, sociology and studies of Christianity, plus social economics. Higher degree (mag.art) 1975 in sociology with specialization in mass communication and sociology of religion. The dissertation was on "Secularization in the Nordic countries - studied through programs on church and religion in radio and tv" (in Norwegian). Practice as journalist during study years. Editor of the church weekly "Var Kirke" 1975-80. Research fellow in sociology of religion 1980-85 at The department of sociology, University of Oslo with a dissertation for the degree of dr.philos on "The collectivity of faith. A sociological study of processes of dissolution in the Norwegian folk church" (1986, in Norwegian). During these years the Norwegian participant in a comparative research project on religious changes in the Nordic countries 1930-1980. Researcher on local media 1985-86 at the Institute of press research, University of Oslo. Associate professor in mass communication studies from 1987, into the new Department of media and communication that same year. Head of department 1990-1995. Active in the department's cooperation with the University of Zimbabwe on media studies and media research 1990-98. Chair, National Council for Media Studies. Appointed professor of media studies at the University of Oslo 1998. Founding director of InterMedia, University of Oslo 1998-2004, an interdisciplinary research center on design, communication and learning in digital environments. During these years, chair of the flexible learning program and chair of the strategic university program on 'Competence and Media Convergence' (CMC), University of Oslo; chair/board member of the program on Social and Cultural Preconditions for ICT (SKIKT) and the follow-up program on 'Communication, ICT, Media' (KIM) at the Research Council of Norway as well as member of the ICT Forum of the Research Council. Research leave 2004-2006. Guest researcher at UC Berkeley, University of Colorado at Boulder, University of Edinburgh, University of Stirling, Gregorian University in Rome and University of Salzburg. Former guest research periods also at London School of Economics & Political Science and at the University of Leicester. Member of the International Council, International Association for Media and Communication Research (IAMCR) 1992-2000.Member of the research program on Changing Media - Changing Europe by the European Science Foundation 1999-2004. Participant in the international research community on Media, Religion, and Culture since its inception in 1993. Since July 2006 back at the Department of Media and Communication, University of Oslo as Professor of Media Studies. Since 2009 Head of Research at the department. I directed the international research project on MEDIATIZED STORIES. Mediation perspectives on digital storytelling among youth funded by the Research Council of Norway (2006-2011). I was the Norwegian coordinator of the NordForsk research network on Mediatization of religion and culture (2006-2010) and participate in the continued Nordic Network on Media and Religion. I coordinate the research group on Media and Religion in the research network on Religion in Pluralist Societies (PluRel) at the University of Oslo.

GOR004706533
Rethinking Media, Religion, and Culture by Edited by Stewart Hoover
Edited by Stewart Hoover
Communication and Human Values
Used - Very Good
Paperback
SAGE Publications Inc
1997-04-08
342
076190171X
9780761901716
N/A
Book picture is for illustrative purposes only, actual binding, cover or edition may vary.
This is a used book - there is no escaping the fact it has been read by someone else and it will show signs of wear and previous use. Overall we expect it to be in very good condition, but if you are not entirely satisfied please get in touch with us.